Learn more
Size750mL Proof91.5 (45.75% ABV) *Please note that the ABV of this bottle may vary
In 2010 Templeton set aside a few barrels of “the good stuff” for extra aging, this 6-year-old rye is the first new Templeton release in over a decade.

*Templeton has recently changed its designs, and as the original labels are being phased out, there is still a chance that you might receive a bottle different than what is in the picture. Rest assured, the liquid remains the same, regardless of the design. 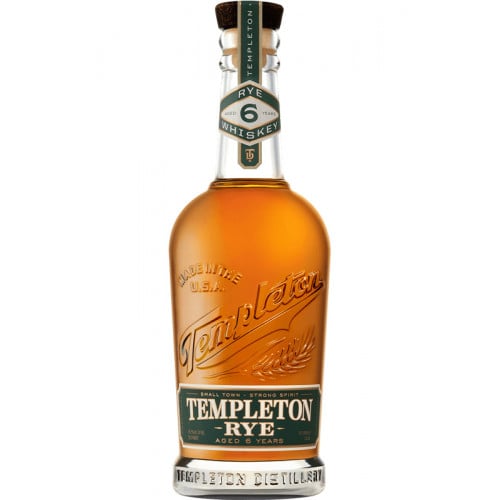 Shortly thereafter, Kerkhoff partnered with notorious bootlegger Al Capone to distribute his rye across the country. Capone bootlegged hundreds of barrels of Templeton Rye to speakeasies in New York, Chicago and as far west as San Francisco — legend has it that he even had a case smuggled into his jail cell at Alcatraz.

Following Prohibition, Kerkhoff continued to cook Templeton Rye for his friends and family, before eventually passing the recipe on to his son, Meryl. Today, nearly a century after it was first distilled, Templeton Rye pays homage to that recipe by Keith Kerkhoff, Alfonse's grandson.

Templeton Rye is made in Indiana from a variety of winter and spring rye grains that possess specific organoleptic qualities. The rye (which comprises over 90% of the mashbill, with the remainder being malted barley) is fermented for 72-84 hours using a yeast culture that was developed specifically for whiskey production. After fermentation, the mash is double-distilled and then aged in charred, American white oak casks (sourced from a Missouri cooperage) for up to 6 years.

The whiskey is bottled in Templeton, Iowa, where Iowa's hot summers, cold winters and wet springs (monthly average temperatures range from a high of 86.2° F to a low of 6.3° F) result in more contact between the whiskey and the oak prior to bottling, helping the whiskey mature faster and giving it more complexity and flavor.

In 2010, Templeton set aside a few select barrels of rye for extra aging. This release is their first new product in over a decade. “Aged six years in new American oak barrels, this limited release of Templeton Rye whiskey is 91.5 proof with an unforgettable flavor” (producer).