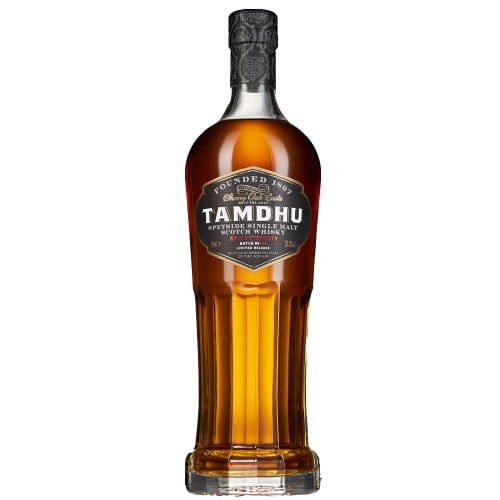 Inspired by the Diamond Jubliee of 1897, which celebrated then-Queen Victoria’s 60 years on the throne, a group of Scottish merchants and whisky traders pooled together capital (roughly equivalent to £20 million in today’s currency) to build the most technologically advanced distillery the world had ever seen. After procuring land adjacent to the River Spey, the group hired Charles C. Doig, the most esteemed distillery architect and engineer of his time, to construct the industrial masterpiece. The result was Tamdhu Distillery, the most modern distillery of its era.

In 1898, the company secured its first precious shipment of sherry casks from bodegas in Spain and has been maturing its whisky exclusively in the finest Oloroso sherry casks ever since. The distillery modernized its processes in 1949, introducing Saladin boxes, a French invention that mechanizes the barley turning process. The increasing production over the next 15 years required the company to scale up its maltings output, and at one stage it needed an impressive 10 Saladin boxes to meet the demand. Today, Tamdhu is one of the last distilleries to malt all of its barley on the spot using a Saladin. All Tamdhu whisky is aged exclusively in the finest ex-Oloroso sherry oak casks, which impart it with a distinct color and taste.

Tamdhu Distillery survived the ups-and-downs of the 20th century until finally closing in 2011 — but only 2 years after its closing, the distillery was purchased by Ian Macleod Distillers, and is now producing whisky by the same exact standards, which earned Tamdhu Distillery its sterling reputation.

Tamdhu Batch Strength 004 is the fourth edition of the multi-award-winning Tamdhu Batch Strength Series. Made from single malts, aged in American oak and European oak ex-Oloroso sherry casks, this edition is bottled at 57.8% ABV and it's not chill-filtered. This rich and complex whisky boasts deep intensity and a natural, deep copper hue due to the oak casks.

The nose is warm and sweet with vanilla and distinct sherry notes. A rich, intense and complex palate with dark fruits, berries, caramel, sherry notes and oaky flavors. The finish is long and smooth.