Size375mL Proof92 (46% ABV)
The Double Double series of Dewar's blended Scotch involves a 4-step aging process. This 27-year-old expression was finished in Paolo Cortado sherry casks, before being bottled at 92 proof.
Notify me when this product is back in stock. 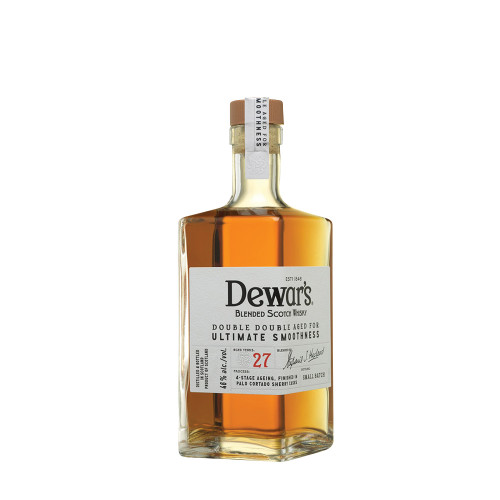 Where the "double aged" series ends, the innovative and premium Double Double picks up. Created by Dewar's Master Blender Stephanie MacLeod, this 27-year-old expression takes the matured single malt and grain whiskies and blends them, then lets each style age separately. Afterwards, both are blended together and re-casked for an additional month. In the end, the liquid is transferred to Paolo Cortado sherry casks for a round of finishing, before being bottled at 92 proof. The 4-sided bottle reflects the 4 stages of the aging process.

There's almonds, cinnamon, as well as leather, tobacco, and sherry on the nose. The palate is rich with honey, caramel, vanilla, toffee, oak, citrus zest, as well as some chocolate and a hint of smoke. Finishes with lingering oak, citrus, and spice.