Caskers Rewards members earn up to 1 store points back when buying this bottle.
Size750mL Proof80 (40% ABV) each
Distilled in the Caribbean and matured in California, these rums are available exclusively through Caskers for a limited time.
Notify me when this product is back in stock. 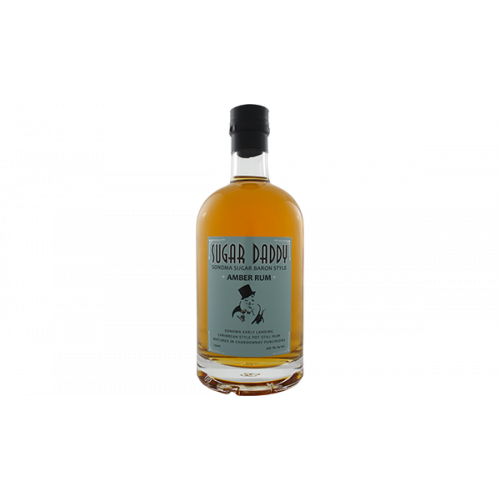 Born in 1857, Adolph Spreckels was a sugar baron, industrial tycoon and the original Sugar Daddy. In 1881, his father founded the Spreckels Sugar Company, which Adolph eventually inherited upon his father's death in 1908. His wife, who was more than 20 years his junior and eventually became known as the "Great Grandmother of San Francisco,"was often heard calling out for her "Sugar Daddy"at their Sonoma mansion. "We scoured the Caribbean in search of exciting sugar cane rums that would meet the Sugar Baron's taste," says Fred Groth, the owner and master distiller at Prohibition Spirits.

Each of the Sugar Daddy Rum expressions — pre-released through Caskers for a limited period of time — is the product of sourcing the finest Caribbean rum and maturing it in previously used casks at Groth's distillery in Sonoma, California.

Sugar Daddy Light Rum is a lightly distilled Jamaican pot-still rum, which is matured in large puncheon barrels, which were previously used to mature Carneros Chardonnay. The Carneros region of California is known for its fog and cool breezes (it is situated next to San Pablo Bay), which makes it attractive for the cultivation of cooler climate varietals such as chardonnay. The rum is aged for over a year in the puncheon barrels, which contribute flavorful notes of tropical fruits, such as bananas, coconuts and pineapples, to the slightly sweet rum.

Sugar Daddy Amber Rum is a heavy distilled Jamaican pot-still rum, which is aggressively matured in Chardonnay barrels in Sonoma County. The heavily-charred, French oak Chardonnay barrels lend notes of caramel and vanilla to the rum, and complement its strong Jamaican foundation.

Sugar Daddy Dark Rum is an intensely aged rum sourced from Guyana. After aging in Guyana, the rum is brought to Sonoma, where it is finished in recently emptied Hooker's House Bourbon barrels (the barrels aged Hooker's House Bourbon for seven years) and new French oak barrels. This finishing process, which lasts for two years, adds notes of caramel, vanilla and butterscotch to the rum, and nicely balances out the hints of cinnamon, nutmeg and allspice.

"We're really proud of these rums,"say Groth, "and are incredibly excited to have the public try them for the first time."The Sugar Baron lives on in Sugar Daddy Rum. Pick up the set today!

Light: Notes of tropical fruits, including bananas, coconuts and pineapples with a semi-sweet, semi-spicy finish. Amber: Notes of caramel and vanilla, which compliment hints of spices. Soft, sweet finish. Dark: Notes of caramel, vanilla and butterscotch nicely balances out hints of cinnamon, nutmeg and allspice.