Rating:
100%
(2)
Made from a blend of rums matured in used bourbon and Scotch casks, the origins of this rum can be traced back to the 19th century.
$37.99
Add to Wish List

Distilled from sugarcane and aged for up to twelve years, the history of Ron Diplomático Reserva Exclusiva can be traced back to the 19th century when Don Juancho Nieto Melendez, a legendary figure in the history of Venezuela, began distilling rum near Hacienda Botucal.

Named Diplomático in honor of the statesman who brought order and balance to a restless era in Venezuela during the 19th century, Reserva Exclusiva is the product of Venezuela's warm, tropical climate.  The sunny days, cool nights, constant breeze and abundant rainfall create an idyllic environment for growing and cultivating juicy, fresh sugarcane.  Once the sugarcane is harvested, fermented and distilled into rum, it is matured in used bourbon and Scotch whisky casks for up to 12 years.

Reserva Exclusiva is a complex blend of a variety of copper-pot distilled rums that have been individually aged and harmonized. Rich amber in color with aromas of dried fruit, caramel and vanilla, Diplomático Reserva Exclusiva was awarded the Bronze Medal at the 2011 San Francisco World Spirits Competition and the Gold Medal at the International Sugar Cane Spirits Tasting Competition in Ybor City.

Try a taste of the past at an incredible value today!

With a nose of dried fruit and caramel, this rum has notes of baked bananas and chewy toffee. 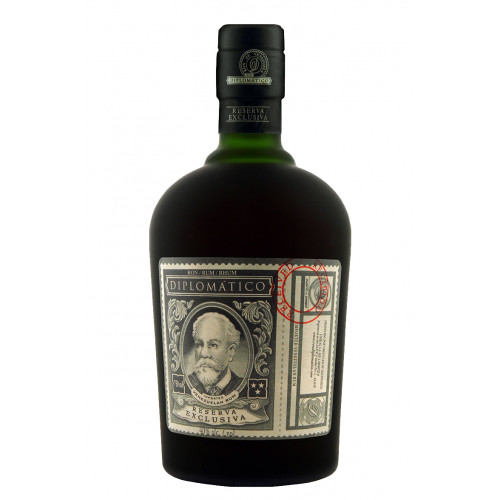