Size750mL Proof94 (47% ABV)
Aged for up to five years, this whiskey earned the Liquid Gold Award from Jim Murray's Whisky Bible in 2014. 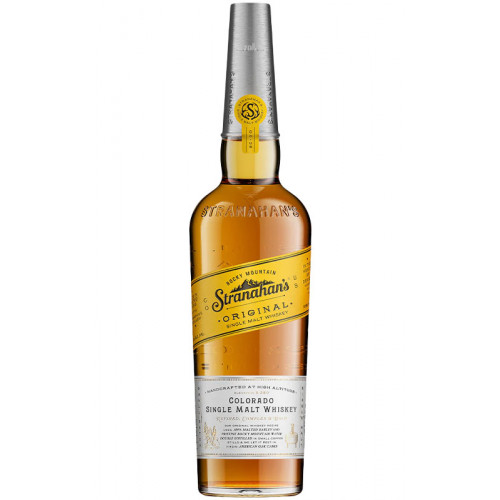 After the whiskey has matured for a minimum of two years (the final whiskey is crafted from a blend of two, three and five year old whiskeys), it is brought to proof with water sourced from the Eldorado spring, situated just outside Boulder, Colorado. Then, each batch is bottled by hand.

Stranahan's Colorado Whiskey has an aroma of tangerines, roasted nuts, peppers and spices that gives way to notes of tobacco, chewy leather, maple syrup and honeyed caramel on the palate. The finish is bold and robust, mingling traditional hints of a single malt with the unique flavors of a bourbon.

Five batches of Stranahan's Colorado Whiskey earned the Liquid Gold Award from Jim Murray's Whisky Bible, scoring as high as 96 points. In addition, the whiskey earned a score of 92 points from Wine Enthusiast.

Aroma of tangerines, roasted nuts, peppers and spices. Notes of tobacco, chewy leather, maple syrup and honeyed caramel on the palate. Finish is bold and robust, mingling traditional hints of a single malt with the unique flavors of a bourbon.