Size750mL Proof82 (41% ABV)
Crafted in the Blue Ridge Mountains, this whisky is "insanely smooth and round, tasting more like a bourbon than any other spirit distilled from barley,"according to The Huffington Post.
Notify me when this product is back in stock. 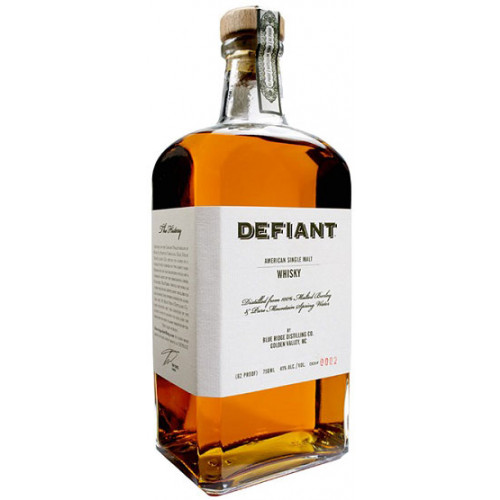 Crafted in the Blue Ridge Mountains of North Carolina, Defiant American Single Malt Whisky is made from just four simple ingredients: premium two-row brewer's barley, cultured yeast, water from an aquifer under the distillery and premium American white oak. "We're rethinking whisky by taking the best of Scottish tradition and combining it with American ingenuity," says Tim Ferris, the distillery's founder. Prior to founding the distillery, Ferris was the founder of Defiant Marine, a salvage-diving team that was enlisted to help clean up New York City's subway system after it was flooded by Hurricane Sandy. "The diving business takes us all over the world, and when we'd finish a big job we'd treat ourselves to the best whisky we could find," says Ferris. "I got interested in single malts, and eventually had to give it a try."

Defiant American Single Malt Whisky is the result of nearly 10 batches that failed Ferris' taste test and went down the drain. "We weren't even sure what we were looking for,"Ferris says of the whisky, "but we knew we'd recognize it when we tasted it."

Defiant American Single Malt is made using premium two-row brewer's barley, which is malted and then cracked on a custom roller mill. After the grains have been milled and mashed, they are fermented with a specially-grown yeast, which ensures the flavor of the whisky is balanced yet bold. Then, the whisky is distilled through a German copper-pot still and aged with American white oak spirals. Spirals, as opposed to barrels, are inserted into the whisky as it ages, rather than containing the product itself. This method of infusion ensures greater contact between the whisky and the wood, and creates a more complex and robust flavor profile. Following maturation, the whisky is brought to proof from water sourced from an aquifer deep beneath the Blue Ridge Mountains and bottled by hand.

The whisky has an aroma of sweet malt and cereal, that gives way to notes of vanilla, caramel, honeyed oak and citrus. The finish is bold and warming, with a hint of clove and ginger. It is "insanely smooth and round, tasting more like a bourbon than any other spirit distilled from barley,"according to The Huffington Post.

"We're starting a whisky revolution," says Ferris. "Charting a new course on the journey. And we're doing it the Defiant way."

Aroma of sweet malt and cereal. Notes of vanilla, caramel, honeyed oak and citrus on the palate. Finish is bold and warming, with a hint of clove and ginger.