Size750mL Proof85 (42.5% ABV)
Aged in used sherry casks and Oregon oak casks, this single malt was named the "Best Small Batch Whisky in the World" by the Whisky Bible.
Notify me when this product is back in stock. 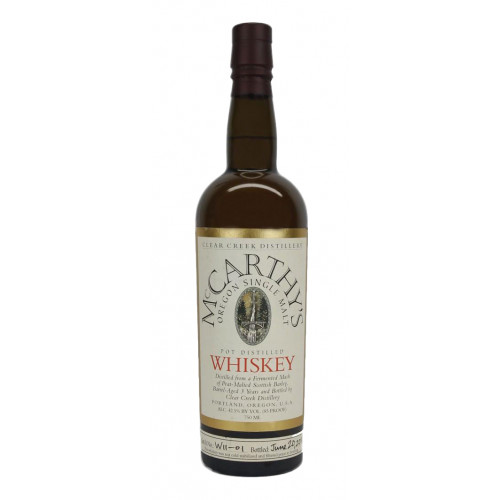 Made from peat-malted barley imported from Scotland, McCarthy's Oregon Single Malt Whiskey would be called Scotch if Oregon were Scotland. The whiskey, smooth and peaty with a clean finish, was named the "Best Small Batch Whiskey in the World" by the Whisky Bible, and was named one of the ten best American whiskeys by Michael Jackson, author of the Malt Whiskey Companion.

Steve McCarthy, the master distiller at Clear Creek Distillery, purchases the finest malted barley at Port Ellen in Islay, Scotland, and imports it into the United States. Once the malted barley has been imported, it is milled, mashed and fermented into a craft beer by the Widmer Brothers, a Portland-based microbrewery. Then, the craft beer is hauled to McCarthy's craft distillery, where McCarthy distills it in a single pass through his Holstein copper-pot still. As a result of distilling the whiskey in one pass, McCarthy must make large cuts to the heads and tails of the distillate, but is able to preserve more of the flavor and character of the barley during distillation.

While most Scottish distilleries age malt whisky in used bourbon casks, McCarthy ages Oregon Single Malt in used sherry casks, which gives the whiskey a heavier body and more lush notes of apricots, cherries and blackberries. In addition, after its initial maturation in the sherry casks, McCarthy's Oregon Single Malt is double-barreled, or finished, in air-dried Oregon oak casks. This dual maturation process contributes unique tannins to the whiskey's flavor profile, and gives the whiskey hints of cinnamon, honey and oaky spices.

McCarthy's Oregon Single Malt Whiskey is a marriage of Scottish ingredients together with American ingenuity.

Light notes of peat and barley on the nose. Flavor profile is full and robust, with hints of malt and peat that are complemented by notes of dried fruits, cherries and plums. Finish is long and gently fades with a warming touch of honey and cinnamon.