Caskers Rewards members earn up to 6 store points back when buying this bottle.
Size750mL Proof107 (53.5% ABV)
From the historic Campbeltown, once dubbed the whisky capital of the world, this stunning single malt is a Springbank limited edition release. Distilled two and a half times, and aged for 12 years in French wine casks, the whisky is bottled at a respectable 53.5% ABV.
Notify me when this product is back in stock. 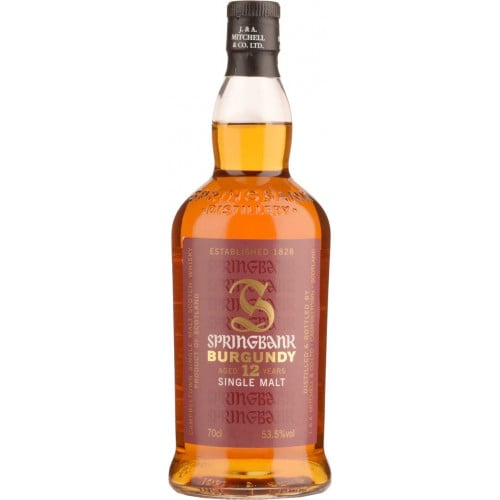 Almost two centuries ago, a small fishing port by the Campbeltown Loch on the Kintyre peninsula was considered the whisky capital of the world. Passengers arriving by sea at Campbeltown Loch — nestled between Macringan's Point and the rocky island of Davaar — were greeted with the sails and masts of the herring fishing fleet and the smoking chimneys of nearly thirty different distilleries that called Campbeltown home. Two hundred years later, Campbeltown Loch is considerably quieter and only three chimneys continue to billow smoke — each acting as a beacon for an industry that, at one point, dominated the peninsula.

Campbeltown is home to the Springbank Distillery, which was founded in 1828, on the site of Archibald Mitchell’s illicit still in Campbeltown (the distillery is currently owned by Mitchell’s great-great-great-grandson). Springbank garnered such a great reputation for its premium quality whiskies, and by the turn of the century — as worldwide demand for Scotch whisky seemed insatiable — distilleries throughout Scotland began cutting corners and outsourcing parts of the distillation process. Springbank Distillery, however, remained true to its Scottish heritage and today, remains one of only two distilleries in Scotland to perform every step of the whisky making process — from malting barley to bottling whisky — on the same premises.

Introduced in 2016, Springbank 12 Year Burgundy Wood is a special single malt, aged for 12 years in ex-wine casks from Burgundy, France. A limited 10,260 bottles were released. With mid-peaty notes, and flavors of French wine, this special release is bottled at a respectable 53.5% ABV.

The nose is bold and rich with French red wine, maple syrup, cranberry and blackcurrants. The palate is velvety with malt and chocolate rounded out by lighter herb and oak notes. The finish is medium dry giving way to licorice and mint wood tannings.