Learn more
Size750mL Proof80 (40% ABV) *Please note that the ABV of this bottle may vary
This whisky is distinctly named after a variety of salmon flies used to lure the leaping salmon out of the water, while fly fishing near the River Spey. The name embodies the vibrant, essence and colorful nature of the whisky and its flavor profile.
Notify me when this product is back in stock. 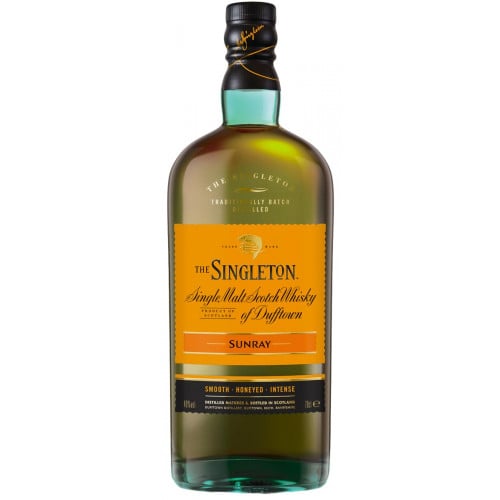 Situated in the Speyside region of Scotland, the Dufftown distillery was founded in 1895 by four wine merchants who, together, purchased a stone built saw and meal mill and converted into a distillery. Located near the confluence of the Rivers Dullan and Fiddich, the distillery draws its water from Jock's Well, which is renown for its incredibly pure and flavorful spring water (on more than one occasion, nearby distilleries — particularly Mortlach — have been caught attempting to divert water from the well to their own distillery).

The Singleton brand is actually manufactured in three Scottish Whisky distilleries one of which is Dufftown. Sunray is one of the two NAS single malts released by Singleton of Dufftown in 2014. Released alongside Singleton Tailfire, the distinct names are derived from a variety of salmon flies used to lure the leaping salmon out of the water, while fly fishing near the River Spey. The names embody the vibrant, essence and colorful nature of the Whiskies' flavor profiles.

Singleton Sunray is a radiant addition to the Singleton stable aged exclusively in American oak casks, this Whisky has a smooth and honeyed yet intense character, heavily influenced by its maturation in toasted Bourbon casks. Marked by its honeyed, vanilla sweetness with aromas of blackcurrant and baked apple, this single malt is a call to all Whisky drinkers, from novice to connoisseur, with its brightly colored eye-catching packaging.

The nose is incredibly soft, with initial notes of demerara sugar, baked apple heather, honey, floral notes, blackcurrant and malty aromas. The palate is sweet and rounded, with mellow spice and fruit. The finish is sweet, with flavors of blackcurrants and vanilla.