Learn more
Size750mL Proof80 (40% ABV) *Please note that the ABV of this bottle may vary
"Dr Matthew Crow, the Singleton master blender has hand picked every cask to create a perfectly balanced, accessible single malt whisky.” —Singleton of Dufftown
Notify me when this product is back in stock. 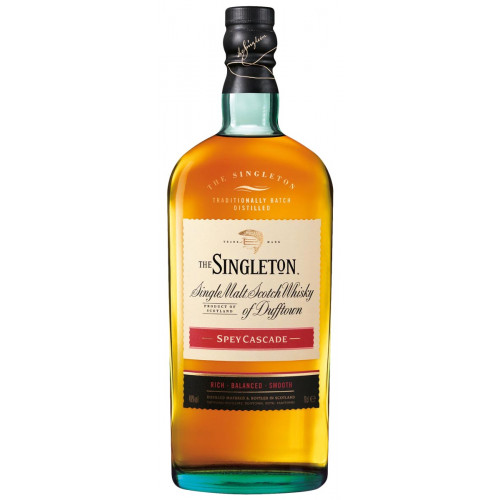 Situated in the Speyside region of Scotland, the Dufftown Distillery was founded in 1895 by four wine merchants who, together, purchased a stone built saw and meal mill and converted into a distillery. Located near the confluence of the Rivers Dullan and Fiddich, the distillery draws its water from Jock's Well, which is renown for its incredibly pure and flavorful spring water (on more than one occasion, nearby distilleries — particularly Mortlach — have been caught attempting to divert water from the well to their own distillery).

The Singleton brand is actually manufactured in three Scottish Whisky distilleries one of which is Dufftown. The Singleton Of Dufftown Spey Cascade is an elegant expression. Crafted from a balanced combination of Whiskies aged in both bourbon and sherry casks at the hand of Diageo Master Blender Dr. Matthew Crow, this Whisky strikes the perfect balance of gateway Whisky and reputable single malt. Smooth without compromising depth of character, this very approachable expression embodies compelling notes of stewed fruit, brown sugar, and toasted nuts.

Spey Cascade is a “recruiter” single malt with a delectable flavor profile designed to appeal to the new generation of entry level Whisk(e)y drinkers and draw them to the single malts category. This pleasantly sweet Speyside adds a new dimension to the Singleton stable, with its elegant, woody notes and sturdy yet nubile character.

Fruit-laden aromas, notes of lightly baked apples layered above grainy cereals, and a slightly dusty, woody fragrance of apple stalks on the nose. The palate is smooth, minty and drying. Lightly sweet, with the sharp fruitiness of stewed apples balanced by savory notes, like a little hint of brine. The finish is menthol-clean with a gentle aftertaste of fruit, in which marzipan, cherry and dark chocolate are offset by a herbal note.