NOTE:
Age statement may vary.
Brought to proof using water that is naturally filtered through West Virginia limestone, this rye whiskey earned the Gold Medal at the San Francisco World Spirits Competition in 2013.
Notify me when this product is back in stock. 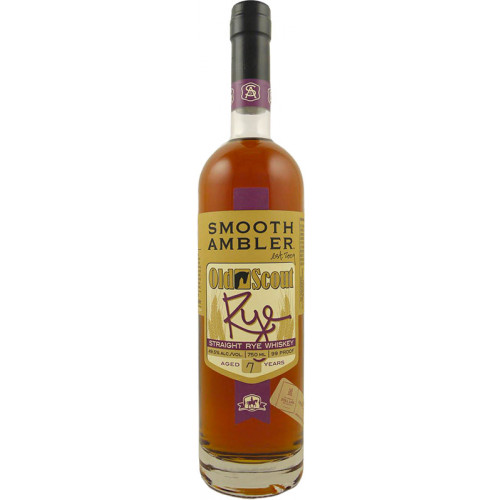 Situated in the rolling Appalachian hills of West Virginia, Smooth Ambler Spirits is the brainchild of Tag Galyean and John Little. "We have just always been passionate about having a good drink," says Galyean, "and once we figured out how to enjoy spirits, that passion turned into having and being able to make them." Smooth Ambler Spirits is situated in a 5,200 square-foot warehouse in the outskirts of Greenbrier County and is dominated by a 500-gallon Christian Carl copper-pot still imported from Germany.

Smooth Ambler Old Scout Rye Whiskey is a sourced rye made from a mash of 95% rye and 5% malted barley. Once the rye is aged, Galyean and Little carefully bring it to proof with pure mountain spring water. The water they use travels through West Virginia's mountains and valleys, before being filtered by limestone that originated during the Mississippian geologic period. This limestone-enriched water adds mineral, earthy notes to the whiskey, which are complemented by touches of dark oak, cloves, ginger and rye.

The rye has an aroma of dried fruits, caramel and cloves, that give way to bold and chewy notes of rye on the palate. The finish is subtle and soft, with hints of citrus, woody spice and mint that are complemented by a touch of vanilla and ginger. The whiskey earned the Gold Medal at the San Francisco World Spirits Competition in 2013.

"We're not a big guy pretending to be a little guy and all this looks really quaint," says Galyean, looking around his distillery. "We want you to know that you're drinking something that has really been tended over and shepherded."

Aroma of dried fruits, caramel and cloves, that give way to bold and chewy notes of rye on the palate. Finish is subtle and soft, with hints of citrus, woody spice and mint that are complemented by a touch of vanilla and ginger.