Size750mL Proof90 (45% ABV)
This is the flagship release of Alex Clark Spirits in Brooklyn, a tribute to Alexander Hamilton’s bold, resourceful Hearts of Oak militia.
Notify me when this product is back in stock. 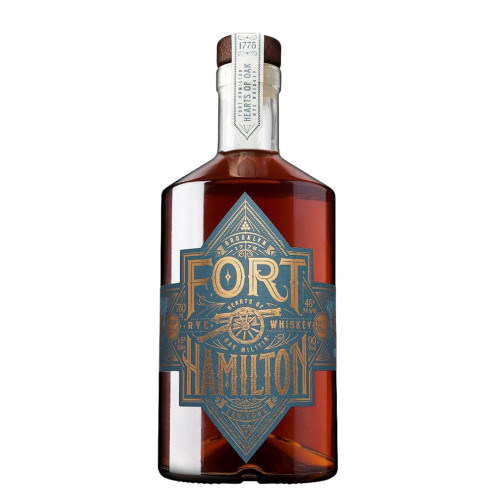 Fort Hamilton Rye is a tribute to Alexander Hamilton’s Hearts of Oak militia’s raid on lower Manhattan in August 1775. Under fire from HMS Asia, they decided to repurpose the battery of British cannons, subsequently forming America’s first artillery company.

A traditional North-Eastern American style rye (which has no corn in the mash), Fort Hamilton rye is distilled purely from rye, malted barley, yeast and water to achieve a rich, full and robust flavor. Barreled at a low proof for a smooth profile that lends itself to the grain rather than the barrel. The warehouse is heated in the winter season to create a more dynamic aging process. Bottled as a single barrel, the rye is non-chill filtered & aged in heavily charred new American white oak barrels overlooking the Brooklyn waterfront, for eighteen months.

As the first release from Alex Clark Spirits in Brooklyn, this bona fide, self-assured rye is one that doesn’t live in bourbon’s shadow but shines brightly on its own. It’s unique on the nose with pronounced aromas of grain and ample spice, wood notes, mint, and eucalyptus. The palate echoes the nose with soothing, smooth flavors, cedar, and black pepper, followed by a bold, smooth finish.

Pronounced aromas of grain and ample spice, wood notes, mint, and eucalyptus on the nose. The palate echoes the nose with soothing, smooth flavors, cedar, and black pepper, followed by a bold, smooth finish.