Learn more
Size750mL Proof92 (46% ABV) *Please note that the ABV of this bottle may vary
This blend of Caribbean rums gets infused with a carefully selected blend of spices. Paying tribute to a legendary tattoo pioneer and taking cues from historic maritime rums, the spiced rum is bottled at 92 proof.
Notify me when this product is back in stock. 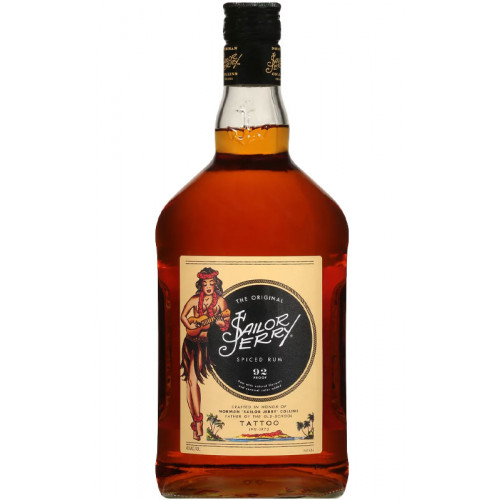 William Grant & Sons is now a behemoth that is among the largest producers of Scotch in the world and is home to several massively successful labels. Yet it is still family-owned, run by Grant's descendants, and independent. Glenfiddich, Balvenie, Girvan Grain, Tullamore, and several other distilleries operate under them. Their portfolio includes gin, vodka, brandy, tequila, liqueur, and rum.

Sailor Jerry (born in 1911 as Norman Keith Collins) was a free-spirited tattoo artist. He found his calling while travelling the US, living a life of train-hopping and hitchhiking. He ended up in Chicago, where he was taught by tattoo legend Gib 'Tatts' Thomas. It was during his time in the Navy that he found his love for ships. Combining his two passions, he became known for his sailor tattoos.

Sailor Jerry Spiced Rum pays tribute to Collins and the wide influence he had on the modern art of tattooing. Blended and bottled in America at 92 proof, a carefully selected blend of spices goes into the recipe that takes its cues from historical maritime rums. With the higher proof and a balance of vanilla, oak, clove, and cinnamon, it's a delicious sipper as well as a versatile cocktail base.

Grab your bottle of this spiced rum today!

The nose of this spiced rum has vanilla, dark fruit, caramel, and baking spices on the nose. Vanilla, oak, cherry, and caramel are balanced on the palate with a touch of clove and cinnamon. The finish is long and sweet.