Size750mL Proof80 (40% ABV)
Aged for a minimum of 18 years, this whisky earned a score of 95 points from the Beverage Testing Institute.
Notify me when this product is back in stock. 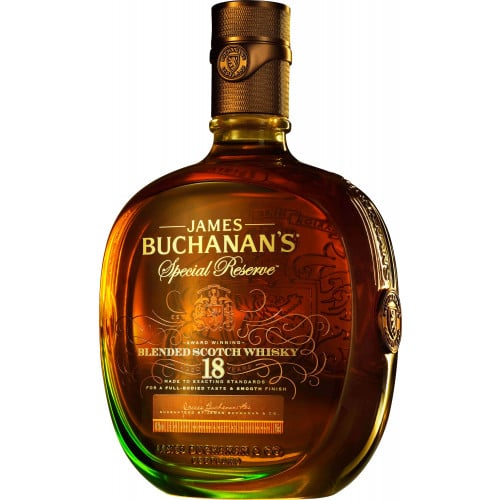 While in London, Buchanan quickly realized that there was an untapped English demand for blended Scotch whisky and opened the doors to James Buchanan & Co. Today, Buchanan's company represents one of the oldest and most prestigious whisky blenders in the world (in 1898, Buchanan was given the Royal Warrant, which allowed him to supply Buchanan's Whisky to Queen Victoria and the Prince of Wales).

"In keeping up with the pioneering spirit of James Buchanan," says Maureen Robinson, the distillery's master blender, "Buchanan's Special Reserve was born." Buchanan's Special Reserve 18 Year Old Scotch Whisky is a blend of 15 unique whiskies, including Dalwhinnie, each of which have aged for a minimum of 18 years. "Dalwhinnie is a delicate, sweet, malt whisky," Robinson adds, and contributes a honeyed, toffee flavor to Buchanan's.

Buchanan's Special Reserve has a deep amber color, along with an aroma of chocolate, cocoa and toffee. The aroma gives way to notes of fruits (particularly red plums), orange and roasted nuts on the palate, and leads to a finish of honeyed oak, coffee and vanilla.

Aroma of chocolate, cocoa and toffee. Notes of fruits (particularly red plums), orange and roasted nuts on the palate. Finish of honeyed oak, coffee and citrus.