Size750mL Proof86 (43% ABV)
Aged for a minimum of 12 years, this whisky was rated a "Best Buy" by Wine Enthusiast and the "Best Single Malt Whisky Under 15 Years Old" at the International Wine and Spirits Competition.
Notify me when this product is back in stock. 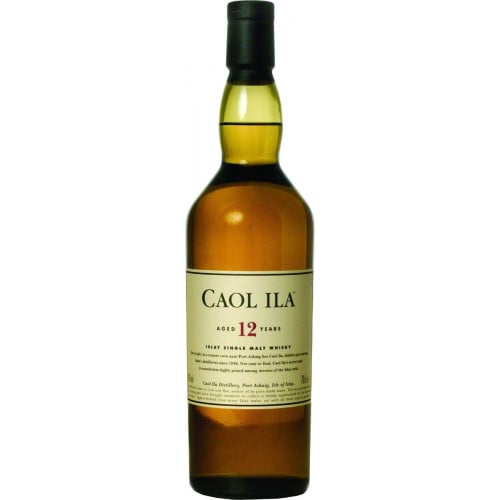 Nestled in a hidden cove near Port Askaig, Caol Ila Distillery (pronounced "Cull Eela,") was founded in 1846 by Hector Henderson. It borrows its name (which means "The Sound of Islay" in ancient Gaelic) from the sea sweeping past its dramatic and almost hidden location — it is situated between a steep cliff and the eastern shores of the Sound of Islay. For over a century, small coal-fired boats known as puffers navigated the Sound and brought barley, coal and empty casks to the distillery. Although the puffers no longer exist, Caol Ila continues to distill whisky using locally malted barley, along with pure spring water sourced from Loch Nam Ban (the water travels through limestone and peat before reaching the distillery).

Once the barley has been malted and fermented, it is distilled through Caol Ila's copper-pot stills. "The stills were designed to replicate the original stills installed in the 19th century," says Billy Stitchell, the distillery manager (Stitchell began working at the distillery in 1974, and is the fourth generation of his family to be employed at the distillery — his father, both grandfathers and one great-grandfather all worked at Caol Ila). Unlike other distilleries on Islay (particularly Lagavulin), Caol Ila distills the wash in copper-pot stills that are less full in order to maximize copper contact. As a result, the whisky is less peaty and smoky than traditional Islay whiskies. After distillation, the whisky is aged for a minimum of twelve years in traditional oak casks.

Caol Ila 12 Year Old Single Malt Scotch Whisky has an aroma of citrus, crushed almonds and olive oil. The body is firm yet supple, with touches of smoke, salty tang, honey, caramel and oak. The finish is smooth and slightly tart, and ends with a touch of peat.

Caol Ila 12 Year Old earned the Double Gold Medal at the San Francisco World Spirits Competition, and earned a score of 90-95 points from Wine Enthusiast, which called it a "Best Buy." In addition, it was rated the "Best Single Malt Whisky Under 15 Years Old" at the International Wine and Spirits Competition, and was rated one of the ten best Scotch whiskies by The Independent.

Aroma of citrus, crushed almonds and olive oil. Body is firm yet supple, with touches of smoke, salty tang, honey, caramel and oak. Finish is smooth and slightly tart, and ends with a touch of peat.