The story of Gosling’s Rum is a serendipitous one, dating as far back as 1806, when James Gosling ventured out to sea at the request of his father. Gosling was heading towards Virginia, equipped with wines and spirits worth 10,000 pounds Sterling. 91 days into the trip the charter on the ship Mercury ran out, forcing Gosling to settle in Bermuda. Eventually he decided to open a wine and spirits shop on the island, the rest is history.

Upon his return to England in 1824 James Gosling opened a shop with his brother Ambrose, which has been in the Gosling family ever since. Their first rum, the Black Seal, was produced nearly half a century later in 1863. Produced in Bermuda, the Black Seal is synonymous with the island. Today, the family business is in the 7th generation of Gosling’s, who continue to lead company, as the largest exporter of any Bermuda made product. Gosling’s is also the only company that blends and bottles on the island.

Gosling’s Black Seal Rum 151 shares the same characteristics as their popular, refined Goslings Black Seal Rum, boasting a higher proof. It has earned a Platinum Medal in the Overproof category at the International Rum Festival and has been widely recognized as the best overproof rum available. Gosling's Black Seal Rum 151 Proof is characterized by its herbal notes, caramel, sweet vanilla and spicy flavor.

Sweet dark chocolate aromas on the nose with sweet vanilla, cinnamon, and cardamom. The palate is herbal with smooth molasses syrup and caramel. The finish subtle with a hint of coffee, tobacco and further sweet vanilla and caramel notes. 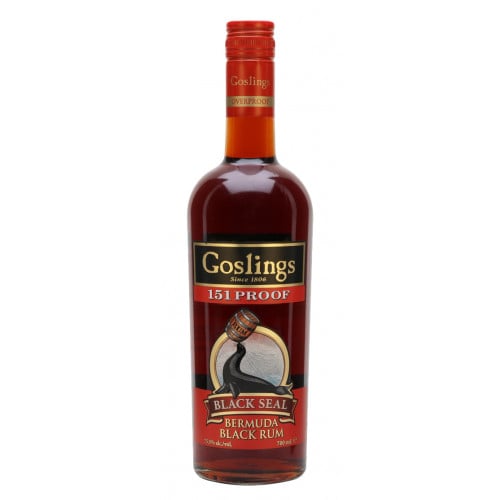