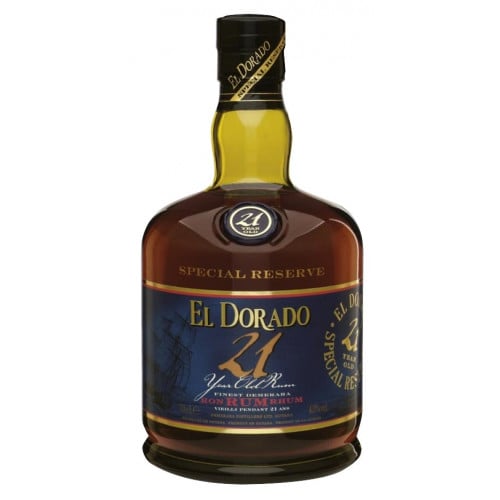 In 1658, Guyana began exporting sugar back to the Netherlands and within a decade, farmer's along the Demerara River began distilling their excess cane sugar into rum. By the turn of the century, the tiny Caribbean country had over 300 unique distilleries. Today, Demerara Distillers Co. — the last remaining rum distillery in the country — pays homage to Guyana's rich tradition of distilling fine rum with El Dorado 12-Year-Old Rum.

El Dorado Rum is made from fresh, raw sugar cane cultivated in Guyana's rich, alluvial soil. After the sugar cane has been harvested by hand, it is transported back to Demerara Distillery by barge. There, the molasses is fermented with a proprietary strain of yeast specifically designed to control the Brix of the wash (Brix is the measure of dissolved solids in a solution). Following fermentation, the rum is distilled through Demerara Distillers' antique Enmore wooden Coffey and copper stills (the stills, which are up two centuries old, were used when the country was still a settlement). This El Dorado Rum 21 Year Old also features rums distilled through the Versailles single wooden pot still and the Albion Savalle still.

Comprised of rums ranging from 21-25 years of age, and matured in bespoke, 45-gallon American oak barrels, this blend is aged within six degrees of the equator in Guyana, where the heat and tropical climate creates an intense interaction between rum and wood. The hand-coopered barrels are also matured custom-built warehouse in Guyana. This rum won a Gold medal at the 2013 International Wine & Spirit Competition in London, and Silver medals in 2014 and 2015.