Size750mL Proof80 (40% ABV)
This deluxe offering from Tanduay is a blend of rums aged 5 and 16 years. After they are blended together, the rum spends an additional 2 years in ex-bourbon barrels, letting the aromas and tastes marry.
Notify me when this product is back in stock. 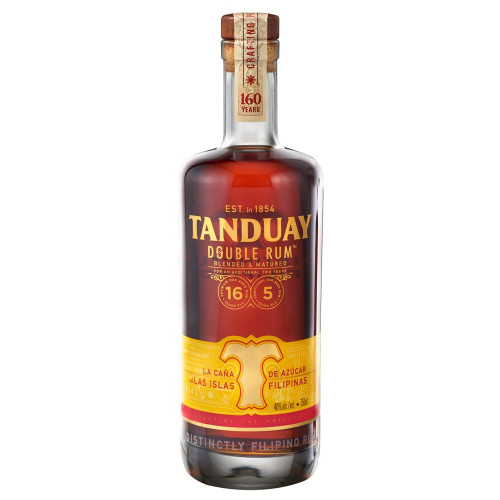 Tanduay Double Rum is a blend of rums that are aged between 5 and 16 years. After their initial period of aging, they are blended together and left to marry for an additional 2 years in ex-bourbon barrels, which gives the different juices time for the aromas and flavors to come together. This deluxe offering from Tanduay is bottled at 80 proof and has an exquisite balance of dried tropical fruits, nutty overtones, as well as vanilla and oak notes.

The dark amber rum has dried tropical fruit on the nose with a prominent pineapple note and a pleasant nuttiness. The palate has more of those tropical fruit notes, along with some brown sugar, cherry, and vanilla. Finishes with lingering oak, raisins, and zesty overtones.