Learn more
Size750mL Proof80 (40% ABV) *Please note that the ABV of this bottle may vary
Aged for eight years in charred American oak casks previously used to age bourbon, this rum is crafted by the Domecq family, which has over fifty years combined experience making rum in Colombia. 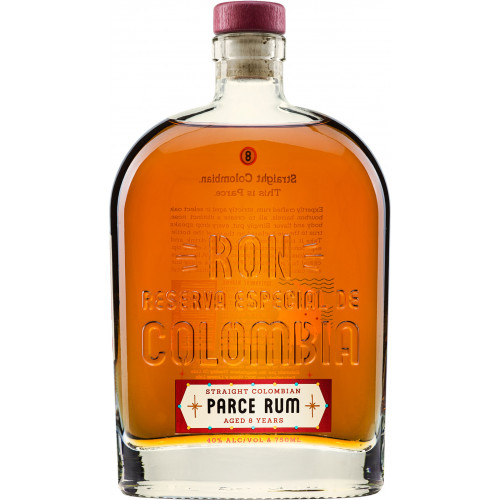 According to a 2013 poll by WIN/Gallup International Association, Colombia is the happiest country on earth — Parce founders (and brothers) Brian, Jim and Patrick Powers hypothesize that this has something to do with the rum. Upon travelling to Colombia, the three brothers were taken by the country’s beauty, culture, and the warmth and hospitality of its people, and they wanted to share the time-honored Colombian tradition of celebrating quality rum with others.

"In South America, they would be drinking rum much more as a sipping rum, enjoying the complexity and character… Certainly sipping rums have existed here [in the United States], but I don’t think there’s been much awareness of them, and we thought maybe we could get the sipping rum on the map here, too."

The Powers brothers were inspired to go into business together by their father, and they found the perfect partners for their venture in another family business — the father-and-son duo of master blenders from Bogota, Colombia, Arthur and Brojen Fenandes Domecq. Together, Arthur and Brojen have over 50 years combined experienced working with rum, and the Domecq family boasts nearly three centuries of history crafting traditional wine, sherry and brandy in the south of Spain (Brojen's grandfather, Jose Ignacio Domecq, was known in the industry as "La Nariz" — the nose — for his expertise in sniffing and blending).

Parce 8 Year Old Straight Colombian Rum is crafted from sugar cane carefully selected from both local (San Cristobal) and foreign (Barbados, Trinidad) sources, all of which is harvested manually every season. Under the guidance of master blenders Arthur and Brojen Fenandes Domecq, the sugar cane is processed and then fermented with natural spring water and homegrown yeast for 36 to 48 hours. Once fermented into "cane wine," the resulting spirit is distilled through a stainless steel, 4-column still — each still produces a slightly different unaged spirit for use in the final aging and blending process. The spirit is then transferred to spent, charred American oak casks where it is aged for eight years before being bottled in the lush Andean mountains of Quindío, Colombia.

Parce 8 Year Old Straight Colombian Rum has an exquisite aroma of cherries and candied fruit, which leads to a playful palate filled with light vanilla sweetness along with notes of almonds and toasted coconut. The finish is accented by a subtle oakiness and more hints of cherries, dark chocolate, whipped cream and baking spices.

Exquisite aroma of cherries and candied fruit, which leads to a playful palate filled with light vanilla sweetness along with notes of almonds and toasted coconut. The finish is accented by a subtle oakiness and more hints of cherries, dark chocolate, whipped cream and baking spices.