Size750mL Proof80 (40% ABV)
Chris Blackwell was a friend of Ian Fleming, now owning the GoldenEye residence where the author wrote the iconic James Bond novels. This limited-edition bottle od the Fine Jamaican Rum comes from a partnership with the 007 film franchise ― the perfect gift for a 007 aficionado. 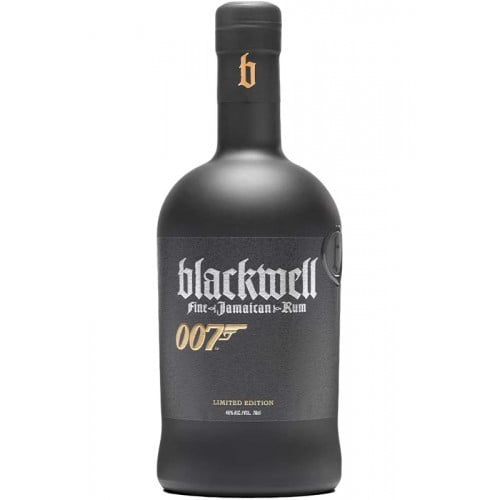 Blackwell Jamaican Black Gold Rum is aged in American oak for one year and bottled at 80 proof. While Blackwell suggest sipping it on the rocks, its rich and deep flavor profile makes it a great choice for cocktails. A portion of Blackwell's proceeds goes to the Oracabessa Foundation that helps with marine conservation as well as the sustainable development of the town.

Blackwell has partnered with the 007 film franchise for the release of Blackwell 007 Limited Edition Black Gold Rum. Chris Blackwell owns Ian Fleming's former residence GoldenEye, making this release all the more fitting. Fleming wrote all the James Bond novels right there, at the mansion. Inspired by his family's recipe, this Jamaican aged rum is rich and fragrant

Get your limited-edition 007 bottle of Blackwell rum today!

Blackwell Rum was co-founded by one of the UK's most legendary record producers and record label owners, Chris Blackwell, who played a major role in the careers of musicians such as Bob Marley and U2. "This is a rum that celebrates Jamaica, my friendships, and also my family legacy," says Blackwell of the Jamaican rum brand that he co-founded with entrepreneur Richard Kirschenbaum in 2008.

Blackwell's son Chris Blackwell Jr. has been taking over the reins of the rum that is based on a traditional family recipe that stems from the time the family owned J. Wray & Nephew ― the distillery at which Blackwell rum is produced today. Developed by Blackwell and Appleton Estate Master Blender Joe Spence, the rum is crafted with Jamaican sugar cane and is a classic blend of pot still and column still rum.
Explore all Blackwell Rum bottles >>

There's orange zest, tropical fruit, vanilla, and toffee on the nose of this invitingly aromatic dark amber rum. Coconut, citrus, caramel, and toasted oak are on the palate, culminating in a satisfyingly smooth and complex finish.