Learn more
Size750mL Proof80 (40% ABV) *Please note that the ABV of this bottle may vary
Aged for up to 30 years, this rum earned a score of 97 points from Wine Enthusiast. 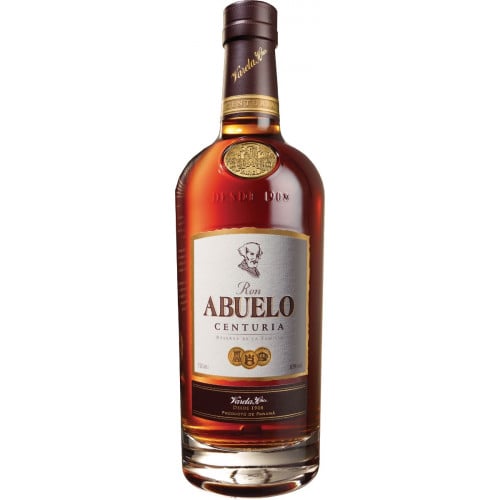 Five years after Panama seceded from Colombia, Don Jose Varela — a young Spanish entrepreneur — opened the first sugar mill in Pesé, a small city situated in southern Panama. Thirty years later, Varela began distilling the excess sugar cane that he harvested into rum. While rum has traditionally been associated with the Caribbean islands, the rum matured in Pesé is uniquely flavorful due to Panama's climate. The tropical rainfall, humid days and breezy nights produce incredibly ripe sugar cane, and add character and personality to the rum as it matures. Today, Luis J. Varela — Don Jose's grandson — represents the third-generation of master distillers in his family. "Our brand is the expression of our long and passionate quest to produce the finest aged rum in the world,"Varela says.

Ron Abuelo Centuria Rum is a limited-edition rum crafted exclusively from sugar cane harvested on the Varela Estate. While many sugarcane farmers burn their fields prior to harvesting their plants (burning enables faster cultivation), Varela refuses to use flame-harvesting due to the detrimental effects it has on the sugars residing in the base of the cane stalk. Rather, when the sugarcane reaches its peak of maturity, expert farmers at the Varela Estate tenderly harvest the crops by hand.

Once the cane has been harvested, it is shredded at the distillery before being fermented and distilled. Following distillation, the rum is solera-aged for up to 30 years. Solera aging is a process that has generally been reserved for aging cognacs, ports and sherries. It involves filling a series of casks at different intervals over a long period of time. As rum from the oldest cask is emptied and bottled, the cask is re-filled with an equivalent amount of rum from the second-oldest cask in the solera. This cascading effect continues until the youngest cask in the solera is filled with new rum. As a result, no cask in the solera is ever fully emptied. In addition, as the younger rum cascades through the solera, its average age and complexity gradually increases over time.

Ron Abuelo Centuria Rum was crafted to celebrate the distillery's 100th anniversary. The rum has a dark caramel color, along with an aroma of sweet vanilla, toffee and chocolate. The aroma gives way to notes of crème brÃ»lée, molasses, coffee and dark tea on the palate, and finishes with a touch of sweetness.

The rum was named one of the top 10 rums by Gayot, and was rated one of the Top 50 Spirits by Wine Enthusiast, which gave it a score of 97 points. In addition, it earned a score of 96 points from the Beverage Testing Institute, which said that it was "a fantastically flavorful and balanced sipping rum."

Dark caramel color, along with an aroma of sweet vanilla, toffee and chocolate. Notes of crème brÃ»lée, molasses, coffee and dark tea on the palate. Finishes with a touch of sweetness.