Size750mL Proof80 (40% ABV)
Blended from a selection of premium Caribbean rums, La Hechicera Fine Aged Rum is a superstar solera-aged rum with an exceptionally deep and complex flavor profile.
Notify me when this product is back in stock. 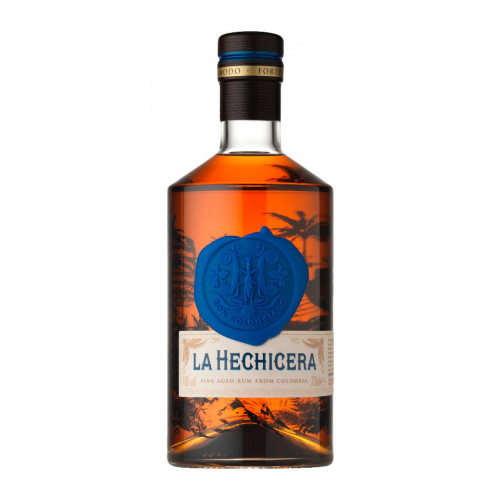 Giraldo Mituoka Kagana is the sone of Japanese immigrants. He started his career cutting sugarcane in Cuba during the revolutionary years. But for the last two decades, he and three generations of his family have been producing fine rums in Columbia.

In Spanish, “La Hechicera” translates as “The Enchantress.” And this seems a fitting description. Although the distilled cane spirits in La Hechicera Fine Aged Rum are sourced from around the Caribbean, they are married and aged in their home country of Columbia. Importantly, they are aged in ex-Bourbon casks using the Solera method which yields superior complexity and a deeper flavor profile. It also means that the “exact” age is hard to quantify. But the youngest spirit is aged twelve years and some of the spirit has been aged a full twenty-one years.

The creators of La Hechicera Fine Aged Rum recommend it be taken straight with a single cube of ice to keep the flavor profile clean — and we don’t disagree. All that hard work delivers a truly great sipping rum with huge note of roasted coffee and cocoa on the nose; deep plum, chocolate, mint, and spice notes on the palate; and a long finish of nutmeg, pepper, and bananas.

Over the last five years, La Hechicera Fine Aged Rum has won more than a dozen awards, including a Double Gold at the San Fransisco World Spirits Competition, a Gold medal at the International Spirits Challenge, two Gold medals at the Spirits Business Awards, and many others.

La Hechicera Fine Aged Rum has espresso and dark chocolate on the nose and a rich palate of dark stone fruits, mint, orange zest, spices, and tobacco. The finish is long with bananas and pepper.