Size700mL Proof86 (43% ABV)
This range-topping expression is a blend of rums from Guyana and Jamaica. Aged at least 14 years in casks that used to hold arrack, the 86-proof rum features a vibrant design that celebrates the history of hard rock icons Kiss.
Notify me when this product is back in stock. 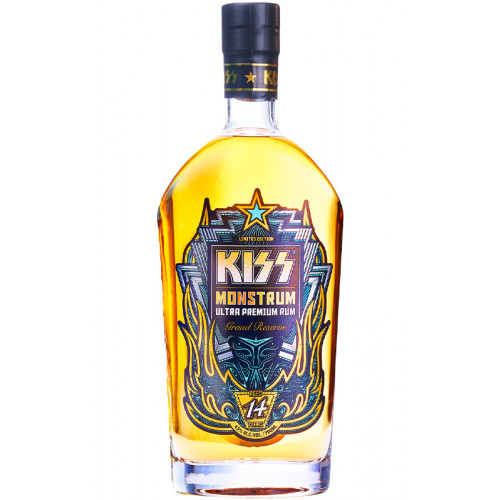 Known for their timeless rock classics as well as their extravagant makeup and stage outfits, Kiss is widely regarded as one of the most influential bands in the history of rock music. Today, the band is still going strong after 50 years in the music industry and more than 100 million albums sold. The band teamed up with Brands For Fans for the release of Drink It Up by KISS ― a portfolio of premium spirits.

Founded in 2012, Brands For Fans is a Swedish company that operates on the global market and specializes in working with bands and artists who want to go into the spirits business. They've already worked with several legends that include Judas Priest, Ozzy Osborne, Motörhead, Slayer, Scorpions, In Flames, Rammstein, and Ghost, releasing so-called "liquid merchandise." The Drink It Up by KISS lineup currently consists of 3 different rums and a gin.

KISS: Monstrum is an ultra-premium dark rum that comes from Latin America and the Caribbean. It was crafted with rums from Guyana and Jamaica that have been aged for at least 14 years in casks that used to hold arrack. The rum is bottled at 86 proof without any added sugar or flavoring, making for a well-balanced, elegant, and complex spirit. The vibrant design features several references to the band's history with glow-in-the-dark details.

Grab one of only 20,000 numbered bottles of this ultra-premium rum today!

Complex aromas of arrack, raisin, coconut, and vanilla greet the nose. The palate is spicy with oak and a very gentle sweetness, as well as notes of dark sugar, vanilla, and arrack. The finished is well-balanced, long, and sophisticated.