Size750mL Proof80 (40% ABV)
Only 1,000 bottles of this limited edition rum, which is crafted exclusively from blackstrap molasses, will ever be produced.
Notify me when this product is back in stock. 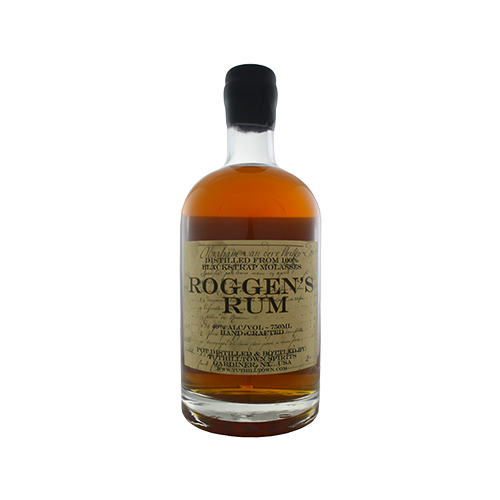 In the early 1800's, the State of New York was responsible for the production of nearly half of the grains harvested in the United States. The Hudson Valley, which extends from New York City northward through Albany, was the country's original breadbasket and was home to thousands of farmers, hundreds of whom distilled the excess grains and fruits they harvested into spirits. In the early 20th century, the onset of Prohibition forced these farmers to abandon their stills.

Roggen's Rum is a handcrafted rum that celebrates the history of the Hudson River Valley and the early pioneers who made it a bustling center of economic activity. In particular, the Roggen brothers, who had emigrated from Switzerland to New York in the early 19th century, opened a mercantile exchange that serviced communities up and down the river and traded in various commodities, including rum.

Roggen's Rum is crafted exclusively from blackstrap molasses, which is fermented using a proprietary strain of yeast at Tuthilltown Spirits. After fermentation is complete, the rum is distilled through a copper-pot still and aged in a combination of virgin American oak casks and casks that have previously been used to mature bourbon. Once the rum has perfectly matured, it is brought to proof and bottled by hand.

Roggen's Rum has a golden yellow color, along with an aroma of maple syrup, pancakes and cedar. The aroma gives way to a chewy body with notes of caramelized oranges, brown sugar and dark caramel. The finish is lingering, with touches of vanilla and dark tea.

Only 1,000 bottles of this limited edition rum will ever be produced. Pick one up today!

Golden yellow color, along with an aroma of maple syrup, pancakes and cedar. Chewy body with notes of caramelized oranges, brown sugar and dark caramel. Finish is lingering, with touches of vanilla and dark tea.