Size750mL Proof100 (50% ABV)
Aged for a minimum of four years, this rye whisky was named the "Best North American Whisky" by Whisky Magazine.
Notify me when this product is back in stock. 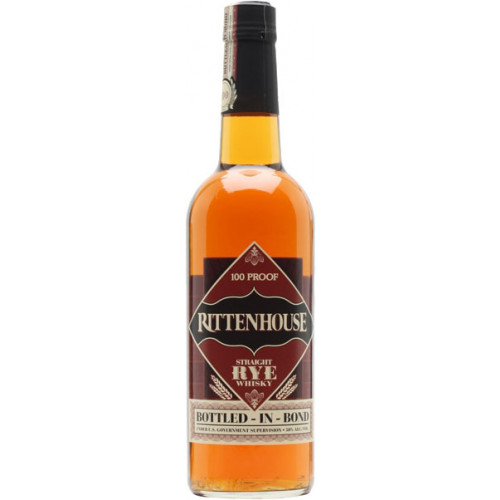 During the American Revolutionary War, the British Royal Navy imposed a blockade against American ports, which prevented the colonists-turned-revolutionaries from importing crucial supplies into the United States. As a result of blockade, American distilleries, which had been distilling molasses imported from the Caribbean islands into rum, began distilling rye grains instead.

By the end of the war, approximately 5,000 log stillhouses were operating in Pennsylvania's Fayette, Allegheny, Westmoreland and Washington counties, producing an incredibly aromatic rye whisky known as Monongahela Rye (the rye was named after the Monongahela River, which was situated adjacent to a number of distilleries). Following the Whiskey Rebellion — a bloodless battle that was instigated by an excise tax imposed on distilled spirits — a number of these distillers moved south into Kentucky and Tennessee.

Rittenhouse Straight Rye Whisky is a Kentucky rye whiskey crafted using the same traditions that Pennsylvanians used to craft Monongahela Rye over two centuries ago. After the grains are mashed and fermented, the whiskey is distilled and aged in new, charred American oak casks for a minimum of four years (although the average age of the rye is closer to six years old). Following maturation, the whiskey is bottled-in-bond at 100 proof.

Rittenhouse Rye has an aroma of cocoa, toasted rye and oak spices, along with hints of vanilla and caramel. Notes of rich, intense chocolate, cloves and spices dominate the palate, and are balanced by sweeter notes of vanilla, orange zest and raisins. The finish is long and beautiful, with touches of cocoa beans, baking spices and allspice.

Rittenhouse Rye earned the Double Gold Medal at the San Francisco World Spirits Competition, where it was named the North American Whiskey of the Year. In addition, it earned a score of 94 points from Wine Enthusiast, which named it one of the Top 50 Spirits of 2010. It was also named the Best North American Whisky by Whisky Magazine and "Best Buy Whisky of the Year" by Whisky Advocate.

Aroma of cocoa, toasted rye and oak spices, along with hints of vanilla and caramel. Notes of rich, intense chocolate, cloves and spices dominate the palate, and are balanced by sweeter notes of vanilla, orange zest and raisins. Finish is long and beautiful, with touches of cocoa beans, baking spices and allspice.