Size750mL Proof92 (46% ABV)
Aged for a minimum of two years, Redemption Rye represents a unique expression of American whiskey.
Notify me when this product is back in stock. 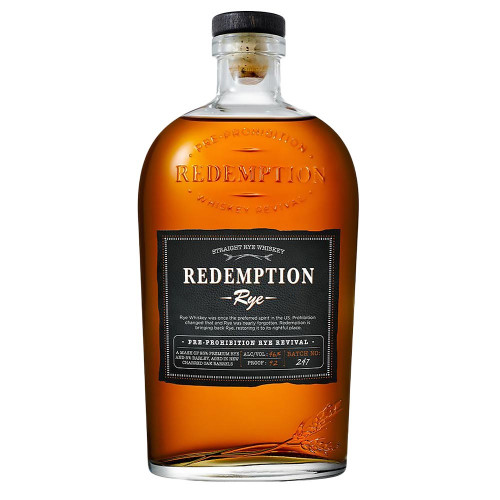 Nearly 100 years after Prohibition, the preferred whiskey of the saloon era is experiencing a resurgence. By law, rye whiskey must be made from a mash of at least 51% rye. Rye that has been aged in charred, new oak barrels for at least two years earns the title "straight rye whiskey".

Redemption Straight Rye Whiskey is made from a mash of 95% rye and 5% malted barley, giving it a bold and spicy flavor that can be enjoyed neat or in any cocktail. Once the rye has aged for a minimum of two years, it is brought to proof and bottled immediately in order to ensure that the barrel notes of cinnamon, oak, and dried fruits complement the bold notes of rye. Redemption Rye earned a Silver Medal at the San Francisco World Spirits Competition and earned the title "Best New Spirit" at the 2012 Tales of Cocktail competition.

Redemption Rye represents a unique expression of American whiskey at an incredible value. Try it today!

Aroma of citrus, dark fruits and cedar. Notes of cinnamon, oak, and dried fruits complement bold notes of rye and lead to a warming finish.