Caskers Rewards members earn up to 6 store points back when buying this bottle.
Size750mL Proof92 (46% ABV)
Only 1,260 bottles of this rum, which was aged for 11 years, have ever been produced.
Notify me when this product is back in stock. 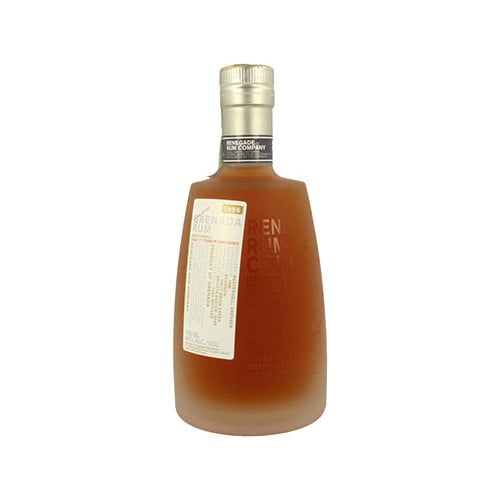 Situated in the southern Caribbean, the island of Grenada is only 133 square miles and home to just 110,000 residents. Still, the island enjoys a nutrient-rich soil and fertile farmland and as a result, has become one of the world's leading exporters of certain crops, including nutmeg and mace. In the early 19th century, a Scotsman named Sir William John Stone purchased a 950-acre farm on the island that had been primarily used to harvest tropical fruits, including coconuts, papayas and bananas. After purchasing the farm, Stone refocused the estate on the cultivation of sugar cane, which could easily be exported to Europe and would not rot on its journey. When the Westerhall Estate began producing excess sugar cane, Stone purchased a still and began distilling the excess cane sugar he harvested into rum.

Today, the Westerhall Estate is the third-oldest distillery on Grenada and continues to grow and cultivate its own sugar cane. Once the sugar cane is harvested, it is gently pressed and the remaining sugar cane juice is fermented with a proprietary strain of yeast (unlike most Caribbean distilleries that produce rum using molasses, Westerhall Estate produces its rum from free-run sugar cane juice). The fermented wash is then distilled through a copper-pot still that is equipped with a steam boiler, which allows the distillery to better control the temperature of the rum as compared to a still heated by an open fire (the distillery is only able to produce 3 barrels of rum each day).

Renegade Rum Company Westerhall Grenada Rum was distilled in 1996 on the Westerhall Estate and matured in American oak casks that were previously used to mature bourbon. After its initial beautyrest, the rum was transported to Europe and double-barreled, or finished, in casks that had previously been used to mature wine at the Château Haut-Brion. As a result of its combined 11-year beautyrest, the rum has an intense aroma of caramel, brown sugar and vanilla that gives way to notes of toffee, caramelized oranges, molasses and baking spices on the palate. The finish is long and hedonistic, with complex notes of sweet fruits mingled with notes of spices.

Only 1,260 bottles of this rum have ever been produced.

Intense aroma of caramel, brown sugar and vanilla that gives way to notes of toffee, caramelized oranges, molasses and baking spices on the palate. Finish is long and hedonistic, with complex notes of sweet fruits mingled with notes of spices.