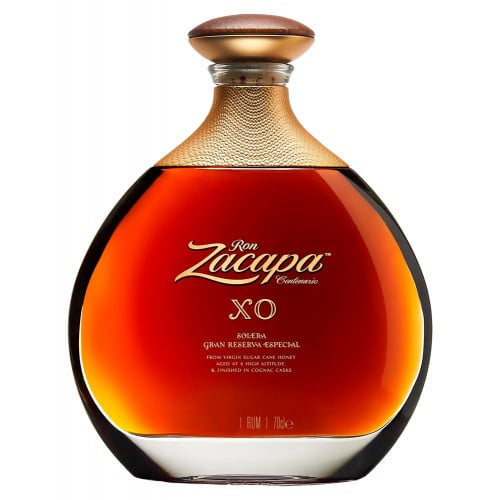 Situated over 1,000 feet above sea level in southwestern Guatemala, the Ron Zacapa Plantation enjoys generous amount of sunlight and mineral-rich, volcanic soils, making it ideal for the cultivation of fresh, raw sugar cane. There, expert farmers — many of whom have been tending to the land for decades — carefully analyze the sugar cane as it matures on the estate, harvesting only the canes that contain high levels of sucrose and fiber and low levels of impurities.

While most rums are made using molasses, which is a byproduct of refining sugar cane, Ron Zacapa Rum is made using virgin sugar cane honey. The virgin sugar cane honey is extracted from the first pressing of raw sugar cane harvested on the Zacapa Plantation, and lends a luxurious, smooth texture to the rum. Once the honey has been extracted, it is fermented with a unique strain of pineapple yeast before being distilled through a single column still lined with copper.

Following distillation, Ron Zacapa XO Solera Gran Reserva Especial is solera-aged through a series of casks that were previously used to mature bourbon, sherry and Pedro Ximenez wine. Solera aging is a process that has generally been reserved for aging cognacs, ports and sherries. It involves filling a series of casks at different intervals over a long period of time. As rum from the oldest cask is emptied and bottled, the cask is re-filled with an equivalent amount of rum from the second-oldest cask in the solera. This cascading effect continues until the youngest cask in the solera is filled with new rum. As a result, no cask in the solera is ever fully emptied. In addition, as the younger rum cascades through the solera, its average age and complexity gradually increases over time.

Ron Zacapa XO is crafted from a marriage of rums that have been solera-aged and are up to twenty-five years old. In addition, the rum is finished in French oak barrels that were previously used to mature cognac. As a result, the rum has an intense mahogany color, along with an aroma of leather, burnt caramel, roasted nuts and orange zest. The aroma gives way to notes of tobacco, cherries, chocolate, dates and figs on the palate, and leads to a long, semi-sweet finish accented by notes of raisins, vanilla and cinnamon.