Learn more
Size750mL Proof88 (44% ABV) *Please note that the ABV of this bottle may vary
This rhum agricole earned a score of 97 points from Wine Enthusiast, which named it one of the Top 50 Spirits of the Year. 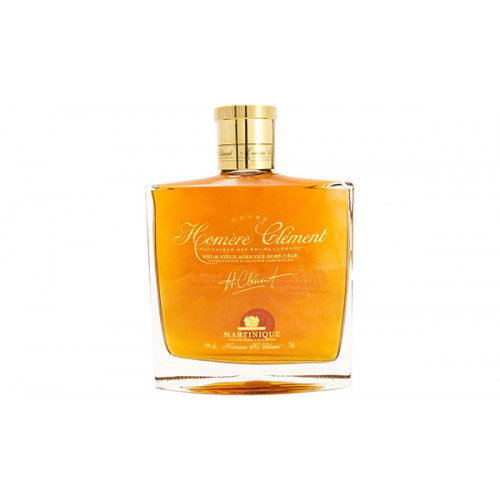 Rhum Clément is a rhum agricole crafted on the island nation of Martinque. The rhum is made exclusively from sugarcane harvested on the Domaine de l'Acajou Estate, which was purchased by Homère Clément in 1887. In order to harvest the sugarcane, expert farmers chop the stalks of the cane as low to the ground as possible in order to preserve the highest concentration of glucose (due to its weight, glucose is pulled to the bottom of the stalk by gravity). Then, within an hour of its harvest, the sugarcane is transported to the distillery and crushed in order to preserve the most fresh and raw flavor possible. Once the sugarcane juice has been extracted, it is fermented with an organic, proprietary strain of yeast before being distilled through Clément's single-column copper still (the still is modeled after the classic Armagnac stills of France).

Rhum Clément Cuvée Homere is the magnum opus of the Rhum Clément Distillery. The rum is a blend of the best rums produced over the past fifteen years at the distillery, each of which was matured either in French Limousin barrique casks or re-charred, American oak barrels.

The rum has an aroma of fresh biscuits, almonds, melted butter and warm spices. Notes of hazelnuts, tropical fruits, bananas, chocolate and pepper dominate the flavor profile, and give way to a finish accented by notes of citrus, oak, honey and cinnamon.

Rhum Clément Cuvée Homere was named one of the Top 50 Spirits by Wine Enthusiast, which gave it a score of 97 points in 2013. In addition, it earned the Gold Medal from the Beverage Testing Institute, and five stars from F. Paul Pacult's Spirit Journal.