Size750mL Proof92 (46% ABV)
Aged a minimum of 15 years, Red Spot Single Pot Still Irish Whiskey has made its return to the realm of Irish whiskey after a half-century.
Notify me when this product is back in stock. 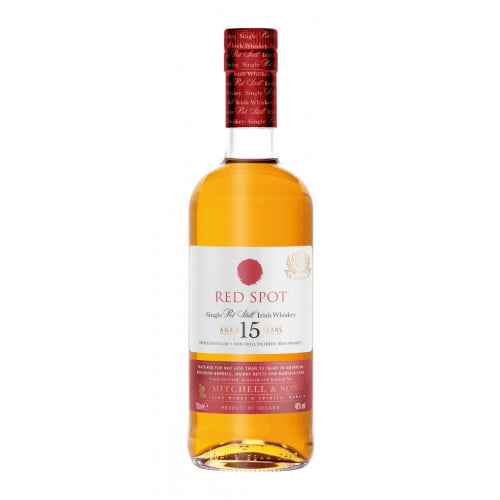 In 1805, the Mitchell & Sons Wine Merchants Company was established in the heart of Dublin, Ireland. By the turn of the 19th century, the Mitchells sold a range of Irish whiskeys under the name "Spot." This name originated from the company's practice of marking casks of different ages with a spot of colored paint. As a result, Mitchell & Sons sold whiskeys named Blue Spot, Green Spot, Red Spot and finally Yellow Spot, which was last seen in the mid-to-late 1960s.

"Pot Still Whiskeys define the traditional flavor character of Irish whiskey and we have seen a renewed interest and growth in the category over the last few years," says Brian Nation, the master distiller at Midleton Distillery. Midleton follows a centuries-old recipe from Mitchell & Son to create this triple-distilled single pot Irish whiskey. To become Red Spot, this whiskey is matured for at least 15 years in a combination of American Bourbon, Spanish sherry, and Sicilian Marsala wine casks. Decades of old recipe books, ledgers, and archive materials provided Jonathan Mitchell with the resources to create a truly authentic whiskey.

Pot still spice and rich cooked fruit aromas on the nose, followed by stewed apple, black cherry and mango. Hazelnut and a touch of new leather fused with toasted American oak, the palate is a combination of Marsala sweet ripe fruit notes. Red pepper, cracked black pepper rounded out by notes of American oak and barley. The finish is extra long with an infusion of fruit.