Learn more
Size750mL Proof108.8 (54.4% ABV) *Please note that the ABV of this bottle may vary
Aged for over 21 years, this whisky was crafted by marrying together four unique single malts.
Notify me when this product is back in stock. 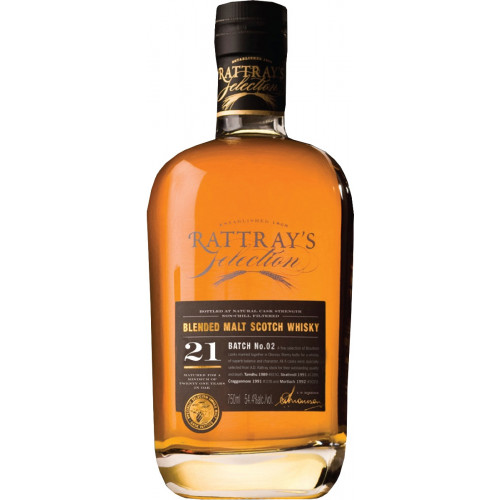 The Speyside region of Scotland is known for its rich, alluvial soils and golden barley fields, which result in elegant and incredibly complex whiskies. In addition, the region’s unique microclimate and location along the North Sea shelter it from the Gulf Stream, providing an ideal environment for maturing an opulent and lush whisky. As a result, over 50 working distilleries call the Speyside region of Scotland home.

Rattray’s Selection Batch #2 Blended Malt Scotch Whisky is crafted from a unique blend of four different Speyside single malt whiskies produced by four distilleries: Tamdhu, Strathmill, Cragganmore and Mortlach. Each whisky was hand-selected based on its quality and depth of flavor.

The backbone of the blend is composed of single malt whisky sourced from the Tamdhu Distillery. The whisky was distilled on September 29, 1989, and matured in a cask that was previously used to mature bourbon (Cask #8150) for 23 years. The Tamdhu whisky contributes bold notes of sharp fruit, barley and spices to the flavor profile of blend.

Once the four whiskies were identified, they were married together and then matured for an additional six months in casks that were previously used to mature Oloroso Sherry. This secondary beautyrest in the Oloroso Sherry casks created a whisky that is engagingly deep and complex, with a lush, dark and heavy flavor profile.

We have only a handful of bottles of this blended malt whisky. Pick one up today!