Learn more
Size750mL Proof84 (42% ABV) *Please note that the ABV of this bottle may vary
Plantation Trinidad 2003 is an elegant fruity double-aged rum from the brand’s Vintage line. This expression was aged for 8 years in Bourbon casks in Trinidad, and four years in Ferrand casks in France, before it was bottled at 42% ABV.
Notify me when this product is back in stock. 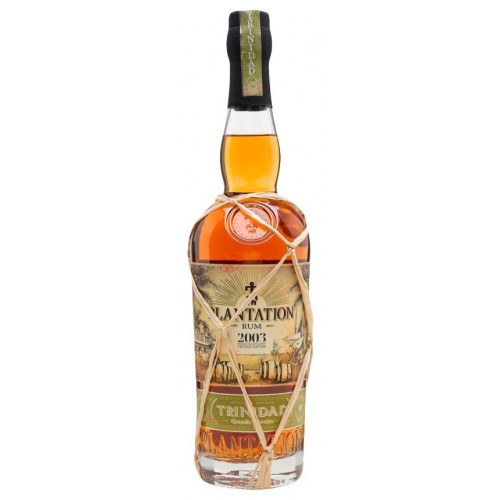 Plantation Rum is produced using a combination of traditional and modern rum-making techniques, and most expressions undergo the brand’s signature double-ageing process. After maturing for several years in white oak Bourbon casks in the tropics, where the angels’ share is high, the rum is shipped to France for cask finishing, including Cognac cask finishing. While the white oak infuses the rum with vanilla, spicy and slightly smoky notes, the secondary finish adds delicate tannic undertones.

Plantation Trinidad 2003 is a fruity double-aged rum from the brand’s Vintage line of very limited editions that celebrate legendary distillers and rare vintages. This expression was distilled in 2003, and aged 8 years in Bourbon cask in Trinidad, followed by four years of continental maturation in Ferrand casks.

The fruity and nutty nose opens up to an elegant palate with notes of tropical fruit, nuts and caramel. The finish is long and dry with some spice.