Size750mL Proof80 (40% ABV)
Produced in Trinidad & Tobago, this premium rum pays tribute to the creation of the House of Angostura in 1824 by Dr. Siegart. Aged in American oak, it's rich with banana and dried fruit notes. 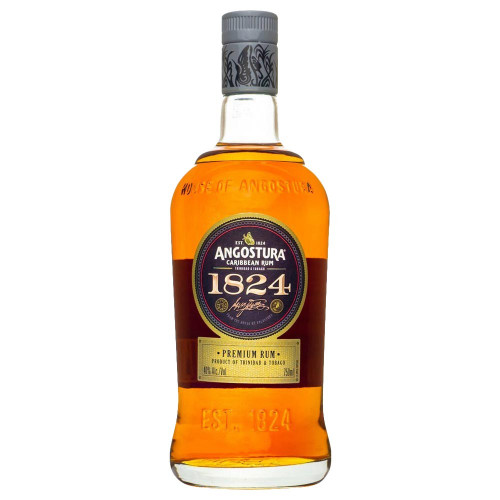 Building on his early success, Dr. Siegert established the House of Angostura in the eponymous Venezuelan city, where he began to manufacture his bitters on a grander scale (the business would later become the sole purveyor of bitters to the King of Prussia, Spain, and King George V). As he continued to expand, Dr. Siegart, along with his younger brother and his son, moved the House of Angostura to Port of Spain, Trinidad in 1876 and began producing rum. Today they are one of the leading rum producers in the Caribbean, offering a wide range of the famous spirit. The House of Angostura is open about the value that they place on nature, and the tropical environment in the Caribbean community in which their award-winning brand is headquartered.

Angostura 1824 Premium Rum pays homage to the lively spirit of Dr. Siegart. Distilled in Trinidad and Tobago, it's a blend of 3 gold rums aged 6 to 17 years. The rum is aged in charred American oak barrels that previously contained bourbon. Only the finest barrels, hand-selected by the House of Angostura’s Master Blender, go into Angostura 1824. Bottled at 80 proof, it has rich banana and dried fruit notes.

The nose opens with banana, dried fruit, vanilla, and caramel notes. Sweet molasses are on the palate along with raisins, spice, vanilla, and plenty of oak. The finish is sweet with lingering notes.