Size750mL Proof80 (40% ABV)
Solera-aged for a minimum of twenty years, this rum earned the Double Gold Medal at the San Francisco World Spirits Competition in 2012.
Notify me when this product is back in stock. 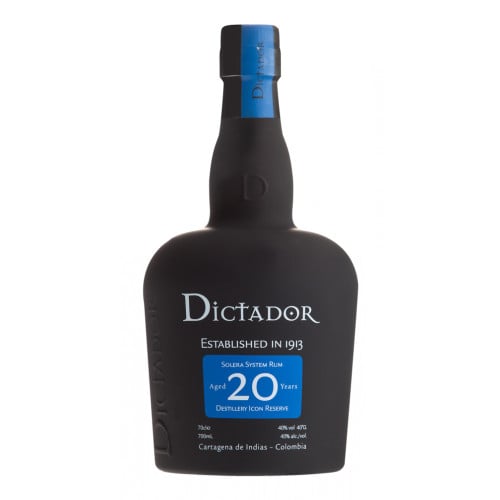 Dictador 20 Year Old Colombian Rum is made from the virgin nectar of raw sugar canes. Once the nectar has been fermented, it is distilled through a combination of copper-pot stills and stainless steel column stills. The wash distilled through the column stills produces a rum that is light in flavor and body, while the copper-pot stills produce a rum that is more intense and robust.

Following distillation, the rum is solera-aged in traditional oak casks from Xérex. Solera aging is a process that has generally been reserved for aging cognacs, ports and sherries. It involves filling a series of casks at different intervals over a long period of time. As rum from the oldest cask is emptied and bottled, the cask is re-filled with an equivalent amount of rum from the second-oldest cask in the solera. This cascading effect continues until the youngest cask in the solera is filled with new rum. As a result, no cask in the solera is ever fully emptied. In addition, as the younger rum cascades through the solera, its average age and complexity gradually increases over time.

Dictador 20 Year Old Colombian Rum has matured for over two decades in a solera, giving the rum a layered, complex flavor profile. The rum has an aroma of caramel, vanilla and honey, which gives way to notes of roasted coffee, honeyed oak and smooth tobacco on the palate. The finish is round and elegant, with layers of dark chocolate, mellow leather and light smoke.

Aroma of caramel, vanilla and honey, which gives way to notes of roasted coffee, honeyed oak and smooth tobacco on the palate. Finish is round and elegant, with layers of dark chocolate, mellow leather and light smoke.