Caskers Rewards members earn up to 3 store points back when buying this bottle.
Size750mL Proof90.4 (45.2% ABV)
Plantation Trinidad 1997 Single Cask 2019 is a rich and complex rum from the brand’s Single Cask collection of triple-aged rums. After aging 15.5 years in Bourbon cask, and 6 years in Ferrand casks, this limited-edition expression spends another 4 months in Kilchoman Peated Whisky casks.
Notify me when this product is back in stock. 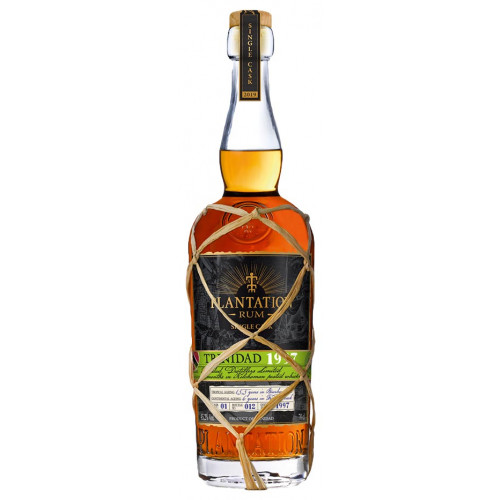 Plantation Trinidad 1997 Single Cask 2019 is a limited-edition rum from the brand’s Single Cask collection of triple-aged rums. The rum, distilled by Trinidad Distillers Limited, is first aged for 15.5 years in Bourbon casks in the tropical climate, and for additional 6 years in Ferrand casks in France. This expression then spends another 4 months in Kilchoman Peated Whisky casks, before it is bottled at 90.4 proof.

The nose starts with a smoky, peaty, earthy profile with black pepper, which evolves into lemon peel, butterscotch and nougat notes. The palate is rich and complex, with a fruitier profile of cooked pear, peach and starfruit with notes of nutmeg, vanilla and macchiato and a hint of malted barley.