Rating:
87%
(1)
This limited-edition expression from the Barrel Series is a blend of 65% 12-year-old and 35% 15-year-old rum that is finished for 8 months in American white oak barrels that used to hold Kentucky rye whiskey. The profile combines the sweet and spicy notes of rum & rye.
$63.99
Add to Wish List

Grander Panama Rum is an independent bottler founded by Dan DeHart. DeHart is from Kentucky, meaning he was raised in the way of the bourbon. Once he discovered the wonderful world of great-quality rum that could be drunk neat, everything changed. After he met the people at Las Cabras Distillery in Panama, the groundwork was set for the launch of Grander Panama Rum in 2015. The bottler now deals in bringing authentic Panama rum to the discerning drinker without the limitations and restrictions that come from larger rum producers and suppliers.

The Las Cabras Distillery is located in Herrera, Panama, and led by Jose Fernandez Perez, who oversees the blending and barrel aging. The distillery grows their own sugar cane. A proprietary yeast strain and local water are used in production, along with ex-bourbon and some ex-sherry barrels are used for maturing, with others (ex-rye, ex-scotch) are used for finishing the rum. The distilling takes place in four independent columns of varying sizes. The rum is bottled without chill filtering and additional colors.

The Barrel Series features limited-release rums that are finished in different casks. This expression has spent 8 months in American white oak barrels that used to hold Kentucky rye whiskey, an uncommon pairing. It's a blend of 65% 12-year-old- and 35% 15-year-old rum that is bottled at 100 proof sans chill-filtering, coloring, or sugar added. Limited to 1680 bottles.

It's a bold balance of rum and rye whiskey throughout the profile. The nose opens with cooked fruit, molasses, and hints of wood and hay. There's molasses, vanilla, chocolate, and a prominent peppery spice on the palate and the finish is long and spicy as well. 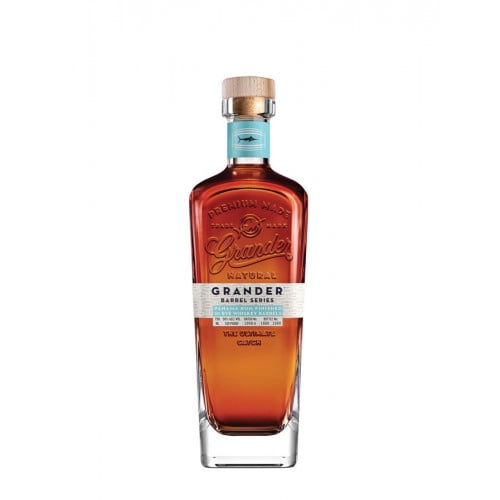