Learn more
Size750mL Proof94.2 (47.1% ABV) *Please note that the ABV of this bottle may vary
Plantation Guyana 2008 Single Cask 2019 is a complex triple aged rum from the brand’s Single Cask collection. This rum spent 9.5 years in Bourbon casks, 1 year in Ferrand casks, and additional six months in casks made alternating chestnut and acacia staves.
Notify me when this product is back in stock. 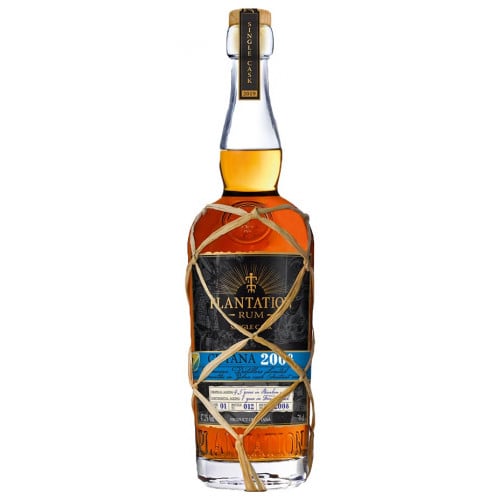 Plantation Guyana 2008 Single Cask 2019 is a triple aged rum from the brand’s Single Cask collection. These rums are very limited releases, which, following the brand’s signature two-stage ageing, undergo additional maturation in carefully selected beer, wine or spirit casks. This expression was distilled by Demerara Distillers Ltd and spent 9.5 years in Bourbon casks in Guyana and 1 year in Ferrand casks in France. It underwent additional six months of maturation in casks made alternating chestnut and acacia staves before it was bottled at 47.1% ABV.

The nose is complex, starting with bitter almond and vanilla and evolving on to a more phenolic profile with leather, allspice and gentian root. The palate is full with a spicier profile of cloves and cinnamon with balsamic notes, followed by bacon, tobacco and maple syrup.