Size750mL Proof80 (40% ABV)
The only true navy rum, Pusser's Rum is aged for at least 3 years in charred oak bourbon barrels in the tropical climate of Guyana. Named the "Single Malt of Rum" by Forbes magazine, Pusser’s Aged 15 Years Nelson Blood is a small batch, award-winning navy rum.
Notify me when this product is back in stock. 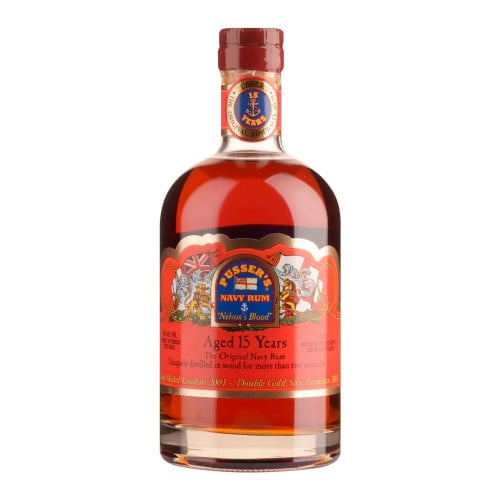 Pusser’s Rum is the only rum that can be considered true navy rum. Navy rum is rooted in over 300 years of tradition in the Royal Navy where from 1655 British Navy sailors were given a daily ration of rum, known as a tot, to help them cope with shipboard life and to give them the courage to be able to fire a cannonball in a faceoff. The rum was distributed by the ship’s "Purser", which eventually became the "Pusser". In modern weapon systems as battles weren’t fought "eyeball-to-eyeball" anymore, this was deemed no longer necessary and so, on July 31, 1970, the last tot was drunk – today known as Black Tot Day.

In 1979, Charles Tobias obtained the rights to blend Navy Rum according to the original Admiralty recipe with the same methods that span through centuries. Not just a premium dark rum, but a true navy rum, Pusser’s Rum is aged for a minimum of 3 years in charred oak bourbon barrels in the tropical climate of Guyana. Pot stilled like single malt whiskies, it’s exceptionally smooth due to the time spent in wooden pot stills – navy rum must be distilled in wood, which imparts its unique flavors to the rum. The molasses used to produce this original Navy Rum come from sugar cane grown in the Demerara River Valley, also deemed the "Valley of Navy Rum".

Named the "Single Malt of Rum" by Forbes magazine, Pusser’s Aged 15 Years Nelson Blood is a small batch, award-winning navy rum. A blend of rums from Guyana and Trinidad, it’s distilled in century old wooden stills and fermented naturally in open vats – the fermentation process takes 72 hours and is crucial to the finishing of this splendid rum. Bottled at 80 proof, this is an all-natural rum with no artificial flavors or colors added. The body is full and round and its warm, smooth and long finish makes it ideal for sipping.

Get your true navy rum today!