Size750mL Proof80 (40% ABV)
Distilled from the molasses of estate-grown sugarcane on the tropical island of Mauritius, this rum is infused with Bourbon vanilla, orange peel and orchid petals.
Notify me when this product is back in stock. 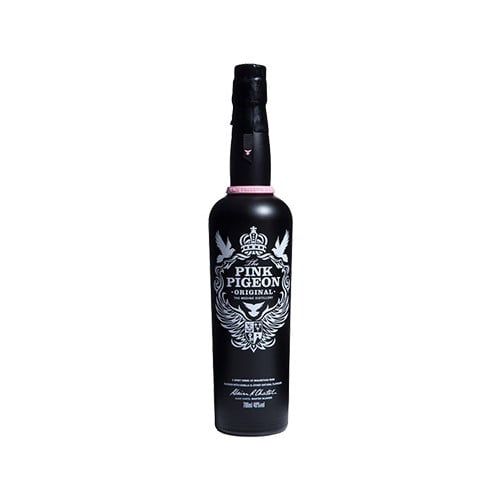 Situated one thousand miles off the southeastern coast of Africa, the remote island of Mauritius was settled by the Dutch in 1507. Much like other European countries at the time, the Dutch used the settlement's tropical climate and indigenous population to cultivate the crops they were unable to harvest on the European continent, including sugar cane and ebony. By the time the Dutch abandoned the colony in 1710, the island of Mauritius had developed extensive sugarcane plantations and relied on the crop as its main export.

In 1926, the Medine Estate, which is nestled on a bed of volcanic soil between the Mauritius mountains and the Indian Ocean, was founded. One of the oldest sugar plantations on the island, the estate began distilling cane sugar into rum decades ago and is the oldest Mauritian distillery still in operation.

Pink Pigeon Rum is named after the iconic and endangered Pink Pigeon, which is indigenous to the island of Mauritius and carefully protected (the Medine Estate donates a portion of the proceeds from each bottle of rum to the Mauritian Wildlife Foundation). The rum is crafted from molasses produced exclusively from Medine estate-grown sugarcane. Once the molasses has been harvested, it is fermented and then distilled through a four-column, continuous still. Following distillation, the rum is infused with three different ingredients: Bourbon vanilla, orange peel and orchid petals.

The Bourbon vanilla, which is handpicked from the rainforests of Reunion Island and Madagascar, is sun dried and matured in wooden cases for eight months. After it has been matured, it is infused into Pink Pigeon Rum for an additional six months by Medine's master blender, Alain Chatel. The Bourbon vanilla gives the rum a rich and creamy texture, and contributes notes of tropical fruits and sweet spices to the rum. In order to balance these flavors, orange peels from the the Indian subcontinent, which contribute a fresh citrus flavor, along with orchid petals from Reunion Island, which add notes of honey and whyte flowers, are infused into the rum.

As a result, Pink Pigeon Rum has a rich, golden color, along with an aroma of sweet vanilla, delicate spices and cloves. The aroma gives way to notes of soft citrus, vanilla, caramel and whipped cream, and leads to a smooth, semi-sweet finish. "Pink Pigeon Rum is the embodiment of all that is good from our tropical paradise," says Chatel.