Size750mL Proof80 (40% ABV)
Crafted with whiskeys that have spent between 13 and 35 years in ex-bourbon casks, this is the 37th release in the renowned Vintage Collection. It is the final release to be crafted by Master Distiller Brian Nation.
Notify me when this product is back in stock. 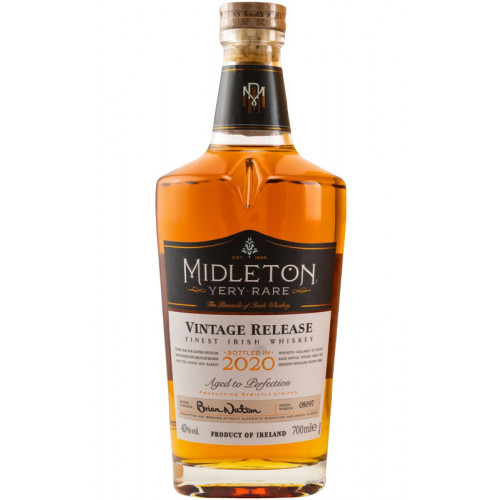 The town of Midleton or Mainistir na Corann (Monastery at the Weir) was established in 1180 and is situated midway between Cork City and Youghal Town. The history of Midleton Distillery stretches to 1796 when the main buildings and water wheel were built for the purpose of a woolen mill. The woolen mill enterprise was short-lived and the buildings were sold to the British government who adapted the complex to a military barracks during the Napoleonic Wars of 1803-1815. During this period, what is now known as the Distiller’s Cottage was home to the senior British Army staff who occupied the site.

Following the departure of the British Army troops, the site was purchased by James Murphy who commenced his distilling business and, in 1825, the first spirit was distilled at the Midleton Distillery. Today, Midleton Distillery marries together time-honored, traditional distillation techniques with modern equipment to produce some of the finest whiskey in all of Ireland.

A new vintage has been released every year through Midleton's Vintage Collection since 1984. Each year providing a unique character to the expression, it's an uncompromising blended whiskey that has the Master Blender select the rarest and finest whiskeys. The 2020 vintage is the final release to be crafted by Master Distiller Brian Nation. "It has been my honor to select the finest distillates from our most exclusive collection of casks to create several of the Midleton Very Rare vintages in the footsteps of my mentor Barry Crockett," says Nation of the 2020 release. The whiskeys that made it into the 2020 were aged between 13 and 35 years in ex-bourbon casks.

Get your bottle of this exceptional Irish whiskey today!

The nose opens with cane sugar, vanilla, spice, orchard fruit, and wood aromas. The palate is fruity and sweet with orange zest, pear, and hints of prickly spice with charred oak notes balancing the fruit & spice. The finish is long with a balance of fruit, spice, and oak.