Learn more
Size750mL Proof86 (43% ABV) *Please note that the ABV of this bottle may vary
Jameson 's The Whiskey Makers series celebrates their Head Distiller, Cooper, and Blender. This expression is all about the latter. It's a fresh and fruity Irish whiskey that's perfect for the summer.
Notify me when this product is back in stock. 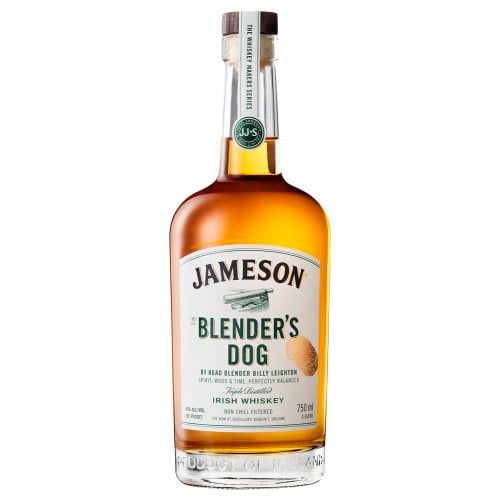 The Whiskey Makers Series celebrates Jameson's Head Distiller, Head Cooper, and Head Blender with 3 unique expressions. Blender's Dog is a tribute to Billy Leighton, Jameson's Head Blender, and a testament to his skill. The "dog" is a blender's best friend — it's a nickname for the tool used to take a sample from a cask of whiskey. A fresh and fruity Irish whiskey, this expression has citrus and tropical notes, as well as plenty of creamy vanilla, butterscotch, and charred oak. It's bottled at 86 proof.

The nose opens with fresh and fruity notes of citrus, pineapple, mango, kiwi, figs, and dates. There's a distinct nuttiness, as well as vanilla and toasted oak. It's rich and creamy on the palate with butterscotch sweetness, spice, plenty of fruit, and oak. Finishes long and fruity.