This product is available in: CA, DC, IL Unfortunately, we can't ship to PO Boxes and APO addresses.

Size750mL Proof92 (46% ABV)
Distilled and matured by Barry Crockett, this whiskey earned the Double Gold Medal at the San Francisco World Spirits Competition and earned 99 pints at 2012 Ultimate Spirits Challenge.
Notify me when this product is back in stock.

This product is available in: CA, DC, IL Unfortunately, we can't ship to PO Boxes and APO addresses. 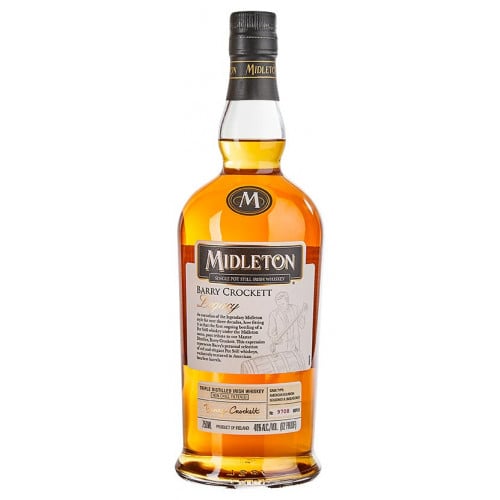 In the early 19th century, a series of buildings in southeast Ireland that were being used to mill wool were sold to the Irish government for 1,250. Within two decades, the government sold the buildings to Lord Midleton, who set about to convert the mill into a distillery. Today, Midleton Distillery marries together time-honored, traditional distillation techniques with modern equipment to produce some of the finest whiskey in all of Ireland.

Midleton Barry Crockett Legacy Single Pot Still Irish Whiskey is made from a mash of malted and unmalted barley that is triple-distilled through a copper-pot still and then matured for up to 22 years in a combination of seasoned American oak casks and casks that were previously used to mature bourbon. It has an aroma of lime, green berries, apples and poached pears. Notes of vanilla, charred oak and cherries dominate the palate, and are accented by touches of spice and light pepper. The finish is well-balanced and slowly fades into hints of lime, orange and cinnamon. The whiskey earned a score of 92 points from Whisky Advocate, and earned the Double Gold Medal at the San Francisco World Spirits Competition in 2013. In addition, it earned a score of 99 points, and was rated the best Irish whiskey, at the Ultimate Spirits Challenge in 2012.

Aroma of lime, green berries, apples and poached pears. Notes of vanilla, charred oak and cherries dominate the palate, and are accented by touches of spice and light pepper. Finish is well-balanced and slowly fades into hints of limes, orange and cinnamon.