Size750mL Proof92 (46% ABV)
Made from malted and unmalted barley, this whiskey was named the Irish Whiskey of the Year by Whisky Advocate in 2016 and was named 2nd Finest Whiskey in the World by the Whiskey Bible in 2018.
Notify me when this product is back in stock. 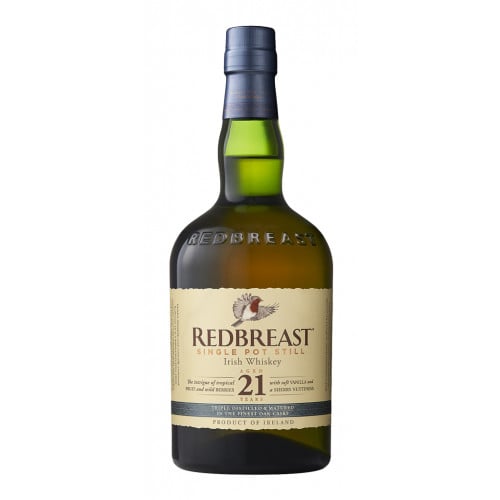 In 1857, W&A Gilbey Co. was founded in a basement cellar at the corner of Oxford Street and Berwick in London. By the turn of the century, the company — a wine and spirits merchant — held the one of the largest stocks of maturing whiskey in its inventory, and had expanded to Dublin, Belfast and Edinburgh. In 1912, Gilbeys began selling a 12 year old whiskey named Redbreast. The name was a reference to the Robin Redbreast (a type of bird) and is attributed to the Chairman of Gilberys, who was an avid ornithologist.

Today, Redbreast 21 Year Old Single Pot Still Irish Whiskey continues to pay homage to the legacy of Gilbey and its Irish origins. The whiskey is crafted from a marriage of malted and unmalted barley, which are milled and mashed before being triple-distilled through traditional copper-pot stills. The inclusions of unmalted barley in the whiskey's mashbill, along with the tradition of triple distillation, are uniquely Irish approaches to producing whiskey.

FINISH
Lingers, seemingly forever, to oak and Pot Still spices and then, the final bow from barley - where it all began.

FINISH Lingers, seemingly forever, to oak and Pot Still spices and then, the final bow from barley - where it all began.