Size750mL Proof113 (56.5% ABV)
Midleton Very Rare Dair Ghaelach Knockrath Forest Tree 2 is made from single pot still whiskeys aged for 15–28 years in ex-Bourbon barrels, and finished for 2 years in Irish oak. This unique expression is the second release in the first modern-day series of whiskeys matured in native Irish oak.
Notify me when this product is back in stock. 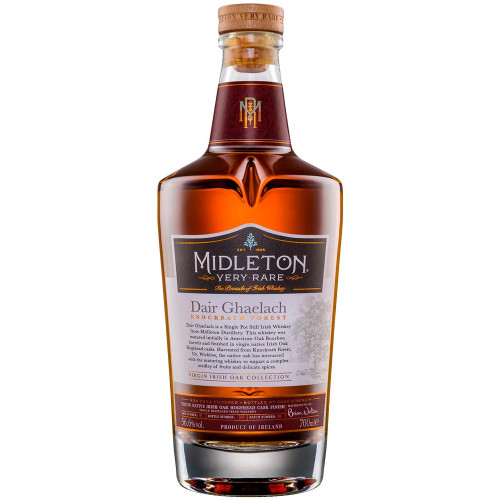 Midleton Dair Ghaelach is a series of the distillery’s Irish pot still whiskeys matured in traditional bourbon barrels, and finished in Irish oak. Midleton Dair Ghaelach was the first whiskey in over 100 years to be matured in native Irish oak, and Knockrath Forest is the third release in the series. Irish oak barrels were not used before due to the lack of sustainable supply, however following the recent strides in the reforestation of Ireland, the distillers are now able to responsibly procure sustainable native oak for maturation.

Midleton Very Rare Dair Ghaelach Knockrath Forest Tree 2 is made from single pot still Irish whiskeys aged 15 to 28 years, which were matured in traditional Bourbon barrels. What makes it truly unique, are additional 2 years of finishing in virgin Irish oak casks made from trees from the Knockrath Estate. This whiskey is bottled at cask strength of 56.3% ABV.

The Irish oak accentuates pot still spices on the nose, which also has hints of vanilla and roasted coffee, layered over fresh fruit evolving from orchard fruits to tropical notes. Pot still spices remain at the fore on the palate, accompanied by sweet notes, such as chocolate and honeycomb, coming from the Irish oak. The finish is long, with fading fruit and spices.