Learn more
Size750mL Proof116.2 - 117 (58.1% - 58.5% ABV) - May Vary *Please note that the ABV of this bottle may vary
Named the #3 whisky in the world by the 2016 Whisky Bible, Midleton’s Dair Ghaelach represents the first time an Irish whisky from the Midleton Distillery has been aged in virgin casks crafted from Irish oak. Current batch available (bottle may vary). 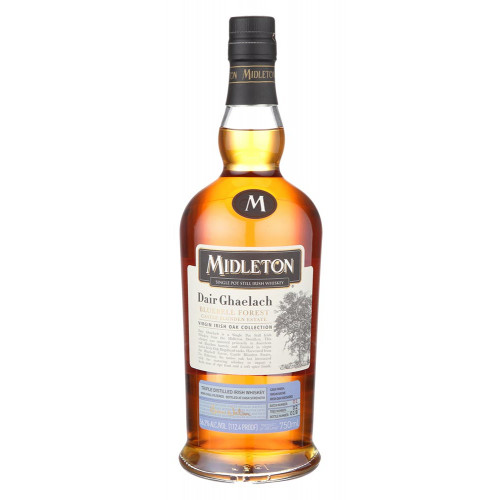 The town of Midleton or Mainistir na Corann (Monastery at the Weir) was established in 1180 and is situated midway between Cork City and Youghal Town. The history of Midleton Distillery stretches to 1796 when the main buildings and water wheel were built for the purpose of a woolen mill. The woolen mill enterprise was short-lived and the buildings were sold to the British government who adapted the complex to a military barracks during the Napoleonic Wars of 1803-1815. During this period, the now Distiller’s Cottage was home to the senior British Army staff who occupied the site.

Following the departure of the British Army troops, the site was purchased by James Murphy who commenced his distilling business and, in 1825, the first spirit was distilled at the Midleton Distillery. Today, Midleton Distillery marries together time-honored, traditional distillation techniques with modern equipment to produce some of the finest whiskey in all of Ireland.

While it’s commonplace for distilleries in Ireland — and Scotland, for that matter — to use American (ex-bourbon), French (ex-wine) and Spanish (ex-sherry) oak casks to age their whiskey, these distilleries rarely, if ever, use indigenous oak in their aging process. In the case of Ireland, many of the country’s forests were depleted during Elizabethan times, as Britain ordered Irish oak to be used to build warships to defend against the Spanish Armada.

Now, for the first time ever, Midleton Distillery has aged a whiskey in hogshead casks made from virgin Irish oak, naming the whiskey Midleton Dair Ghaelach Single Pot Still Irish Whiskey (Dair Ghaelach means “Irish oak” in Gaelic). The casks were crafted from just ten, 130-year-old oak trees felled from the Ballaghtobin Estate in Co. Kilkenny, Ireland, and the whiskey — triple-distilled and blended from a mash of malted and unmalted barley — rested in the Irish oak casks for nearly a year after already spending 15 to 22 years in American ex-bourbon casks.

According to Billy Leighton, Midleton Distillery’s Master Blender, “The process of maturing in native Irish oak has enabled us to showcase our Single Pot Still Irish Whiskey style in a new and innovative way; the casks impart much more generous toasted wood, vanilla and caramel flavors than what we expect from American bourbon and Spanish oak, which we hope whiskey lovers will appreciate and enjoy.”