Size750mL Proof94 (47% ABV)
Maker’s Mark with a French twist, this was the first new Maker’s Mark Recipe in over half a century. Aged with custom char French oak staves. 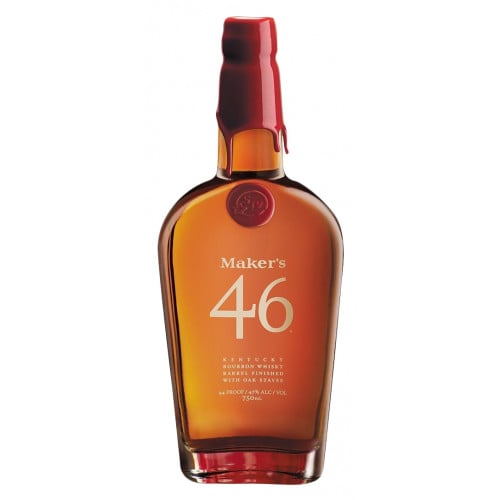 On October 1, 1953, William Samuels Sr. purchased Burks Distillery, which was situated in Loretto, Kentucky, for $35,000. Five years later, the distillery released the first bottles of Maker’s Mark Bourbon Whisky, which featured the distillery’s distinctive red wax seal. The distillery was listed on the National Register of Historic Places in 1974 and was listed as a National Historic Landmark in 1980.

Made from a mash of corn, wheat, and malted barley, Maker’s bourbon is aged in limestone cellars and handcrafted in small batches. They are one of the few distilleries that rotate their barrels from the upper to the lower levels of the aging warehouses during the aging process. This ensures that the barrels get equal treatment, evening out the differences in temperature fluctuation that occurs during the maturation process.

This is the first new Makers Mark recipe in at least five decades. Maker’s 46 is Maker’s Mark with a French Twist. A full-fledged Maker’s Mark, aged for an extended period in seared French oak staves. The staves were sourced from the Independent Stave Company, who experimented with 10 virgin French oak staves, testing several different levels of sear to caramelize the wood sugars and seal in the bitter tannins of the oak.

The final staves, labeled “Profile 46,” were then added to the barrels of original Maker’s Mark, and aged in Maker’s limestone bourbon cellars. The French oak staves create a smoother, bolder, more complex flavor profile, imparting more spice, sweetness, and vanilla onto the spirit. Bottled in a hand-dipped square-shaped vial at a solid 47% ABV.

Hints of wood staves on the nose, caramel, and sweetness. The palate harbors rich complex flavors, a crescendo of wood blending with deep, complex, rich notes of vanilla and caramel, The finish is smooth a subtle.