Learn more
Size750mL Proof100 (50% ABV) *Please note that the ABV of this bottle may vary
This 12-year-old expression is a perfectly-balanced Kentucky straight bourbon whiskey that has spent a dozen years in barrels for a subtle, yet rich and smooth profile. It has won two Gold Medals at the 2020 edition of the San Francisco World Spirits Competition.
Notify me when this product is back in stock. 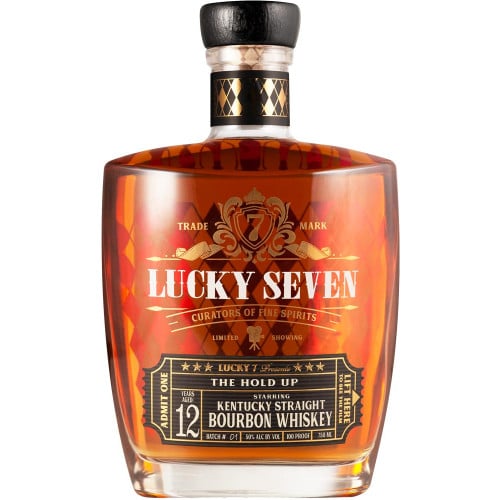 Lucky Seven Spirits was founded by best friends Michael Lahalin and John Pals. Both bourbon fans and cinema aficionados, the pair settled on the moniker Lucky 7, named after the legendary Stage 7 of the Warner Brothers lot, where countless classics such as Casablanca were filmed. Since the giant stage got a reputation for producing so many hits, it got the nickname "Lucky Stage 7".

Lucky Seven "The Hold Up" 12 YO is a Kentucky straight bourbon whiskey that has been aged to perfection for a dozen years and bottled at 100 proof. The expression is a perfect showcase of what Lucky Seven is all about ― in a package that has more oak and a higher proof than their younger entry-level The Jokester. It has won two Gold Medals at the 2020 edition of the San Francisco World Spirits Competition.

Expect a subtle, yet rich profile with notes of dried plum, berries, stone fruit, as well as herbs and spices; namely thyme and dill. Pleasant caramel and oak are on the nose and palate. Finishes super-smooth with lingering spice and brown sugar flavors.