Learn more
Size750mL Proof136 (68% ABV) - may vary *Please note that the ABV of this bottle may vary
This 136 Proof Navy Style Rum has an aroma of licorice, espresso and sherry that gives way to notes of citrus, bananas, tropical fruits, blood oranges and lemons on the palate. The finish is robust and bold, with a touch of root beer and melon.
Notify me when this product is back in stock. 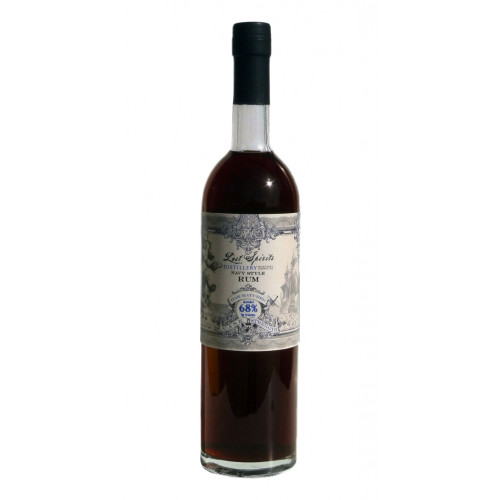 Navy Style Rum is crafted from three simple ingredients: baking grade molasses, evaporated sugar cane juice and water. "By choosing or making raw materials that have the right aromatic acids in them from the start, we boost our overall ester count," says Bryan Davis the founder of Lost Spirits Distillery. A high ester count contributes notes of fruits, flower petals and spices to the rum. "For the rum, this means finding molasses that has a maximum amount of free phenolic acids without other bad tasting chemcials that might pass through the still."After sourcing the ingredients, Davis ferments them before distilling the wash through his copper-pot still. "There are two approaches to distillation,"he says. "The more common approach, called high rectification, is to ferment with a lot of bad stuff in the mix and then use the still to clean the booze up. Some people also choose to ferment very neutral booze and rely on the barrel to do all the work. This is the bubble plate pot and column strategy. The other strategy is to manage the fermentation carefully so that you can distill without plates and capture as much of the fermentation character as possible. This is a low rectification pot still strategy, and it is the one I favor because I have tight control over my fermentation and raw material selection."

Following distillation, the rum is aged in charred, American oak casks that are seasoned with Oloroso Sherry. "We use a controlled charring process in the barrels that incorporates heat, flame, and even special frequencies of light to break the compounds we want out fast," says Davis. "After that, it is about manipulating the environment to make the catalyst from the oak do its job. I won't disclose all my secrets but in truth the aging process should be seen as the last step in a long line of process decisions that create a given spirit."

Navy Style Rum has an aroma of licorice, espresso and sherry that gives way to notes of citrus, bananas, tropical fruits, blood oranges and lemons on the palate. The finish is robust and bold, with a touch of root beer and melon.

Only a handful of bottles of this rum are available.

Aroma of licorice, espresso and sherry. Notes of citrus, bananas, tropical fruits, blood oranges and lemons on the palate. Finish is robust and bold, with a touch of root beer and melon.