Learn more
Size750mL Proof97.4 (48.7% ABV) *Please note that the ABV of this bottle may vary
Housed in an award-winning wooden frame, this whisky was rated one of the top thirty spirits in the world by F. Paul Pacult's Spirit Journal.
Notify me when this product is back in stock. 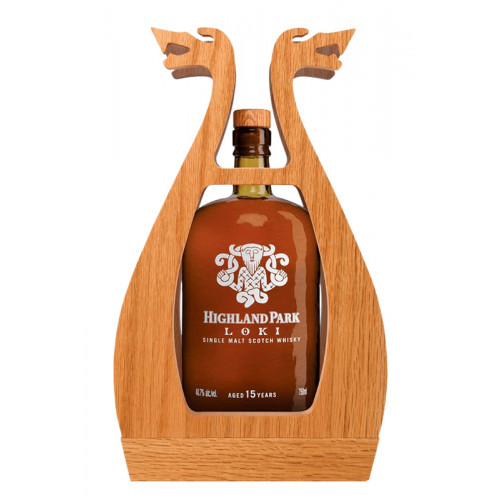 Situated just a few miles north of Scotland's mainland, the Orkney archipelago was occupied by a number of different nomadic and belligerent tribes for centuries. In 875, however, the islands were annexed by Norway and settled by the Norse, who began using the archipelago as a base for Viking raids across Europe. In 1468, the islands were pledged by King Christian I of Norway as a dowry to King James III of Scotland, and since then, the islands connection with Scotland has been perpetual.

Situated in the city of Kirkwall — the capital of the Orkney Islands — Highland Park Distillery was founded in 1798 by Magnus Eunson. The name of the distillery is derived not from the region of Scotland known as The Highlands — the Orkney islands are not a part of The Highlands — but rather, from the region known as High Park, where the distillery was founded.

Highland Park Loki is the second of four releases in the Valhalla Collection available from Highland Park. Named for one of the most treacherous and mischievous characters in Norse mythology, Loki is a 15 year-old limited edition single malt whisky that was matured in both sherry casks and casks that were previously used to mature heavily peated whisky.

The whisky, much like the god it pays homage to, is intriguing and complex, and is housed in an award-winning wooden frame that echos the fearsome contours of a traditional Viking ship. While it has an aroma of citrus and spice, the palate is robust and chewy, with notes of intense smoke and hints of dried fruits. The smoke fades to notes of licorice and chocolate, and finishes with a touch of cloves, cinnamon, vanilla and hickory smoke.

"While everyone will recognize the definite "˜Highland Park-ness' of this 15 year old single malt," says Gerry Tosh, the marketing manager at Highland Park Distillery, "it will be the unexpected and surprisingly smoky dynamics that will really get palates excited and mouths talking. This is unlike any expression that has come before and will beguile and fascinate with its complexity and trickery."

Highland Park Loki Single Malt Scotch Whisky earned a score of five stars from F. Paul Pacult's Spirit Journal, which rated it one of the top thirty spirits in the world.

Pick up one of these rare bottles today!

Notes of citrus and spice on the nose. Robust and chewy flavors of smoke, with hints of dried fruits. Smoke fades to notes of licorice and chocolate, and finishes with a touch of cloves, cinnamon, vanilla and hickory smoke.